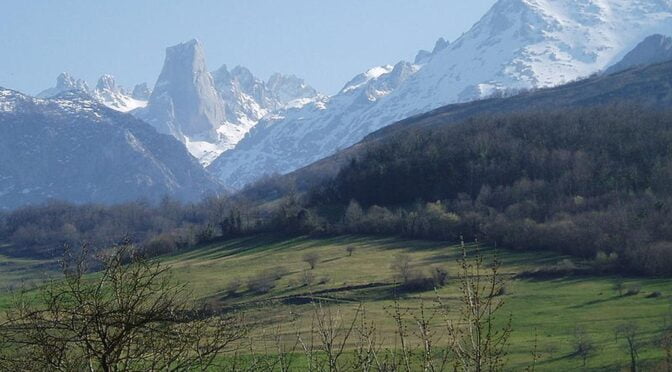 Asturias is a region with an extended rugged coast of cliffs with sandy beaches, coves and caves plus a beautiful inland mountainous area. The Cordillera Cantabrica mountain range forms the southern border of this region.

The Picos de Europa in the east are not only spectacular mountains but also an important and rich haven for plants and wildlife. This National park area (the first to be declared a National park in Spain) is shared between Asturias, Castilla y Leon and Cantabria. The highest peak is Torrecerredo rising to 2648metres.

The mountains usually have snow from November to May (possibly with snow pockets throughout the year) despite the fairly mild winters along the coast. It shares the title of Green Spain along with Galicia and Cantabria with which it has borders.

There are many pre-historic sites that can be visited within Asturias, especially in the east of the region, around Cangas de Onís and Llanes. The Bustillo Cave in Ribadesella, La Peña Cave in San Roman de Candamo and the Llonin Cave in Penamellera feature some excellent cave paintings.

The predominantly-limestone Cantabrian mountains extend some 200 kilometres in total and offer opportunities for activities such as climbing, walking, skiing and caving. They span as far as Galicia province to the west of Asturias, and Cantabria province to the east.

Asturias is situated in a mountainous setting with vast greenery and lush vegetation, making it part of Green Spain. The region has a maritime and mediterranean climate. It receives plenty of annual rainfall and little sunshine (by southern Spanish standards.)

Heat waves are rare due to the mountains blocking southerly winds and winters are very mild for the latitude, especially near sea level.

Asturias has 6 protected areas as follows

1 Fuentes del Narcea Y de Ibias. A stunning area of Asturias containing one of the largest oak forests in Europe.
2 Somiedo Natural Park According to recent studies, 40 to 50 percent of the total population of Cantabrian brown bear resides in the Cantabrian mountain range.
3 Peña ubina la mesa Natural Park. The entire park is an area of ​​great biodiversity and is in an excellentstate of conservation with a third of its surface occupied by forests of high ecological value.
4 Redes Natural Park. The Redes Natural Park is mostly covered by large wooded areas, among which its endless beech forests stand out and is located in the eastern / central area of ​​Asturias. At high altitude there is evidence of glacial erosion that occurred during the Pleistocene period.
5 Ponga Natural Park. More than a third of the Ponga Natural Park is made up of mature forests such as oak, birch, ash, maple and alder and the main forest in the area is called Bosque de Peloño. This is located in the southeast of the natural park and covers approximately 1,500 hectares.. Beech, however, is most predominant and together with other numerous forests scattered around the park they represent places of great importance since they are a vital habitat for emblematic and endangered species.
6 Picos de Europa National Park. The Montaña de Covadonga National Park ( now The Picos de Europa National Park) was established in Asturias in 1918, the first national park in Spain. The now much larger park covers three major massifs – Western, Central and Eastern which are all part of the Cordillera Cantabria range. The dramatic Cares river canyon, which is 1,500m deep, divides the western and central parts.

In Spain, a natural park (Spanish: parque natural) is a natural space protected for its biology, geology, or landscape. As is to be expected, natural parks focus their main attention on the conservation and maintenance of flora, fauna, and terrain.

Natural parks may be maritime or terrestrial and can be in the mountains, along the coasts, in the desert.