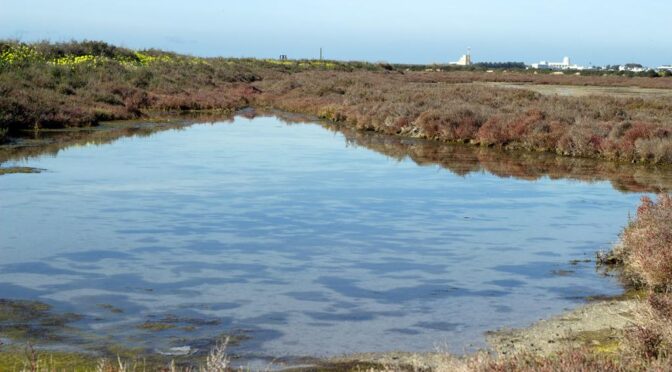 Extensive pine groves once covered a large part of this area.

The tidal marsh of Sancti Petri, which is situated in Chiclana de la Frontera, to the south of the Bay of Cádiz and which forms a part of this natural park, is an area of high scenic value, given that is one of the few marshes that has not been altered by its use as a salt mine. In addition, the condition of the island and the existence of a large stone pine forest (Pinar del Coto de la Isleta) at higher grounds clearly contributes to an image of what the natural landscape of the Bay of Cádiz must have been like many years ago.

Find a hotel in the area of Bahía de Cádiz

Flora in the Bahía de Cádiz is made up of plants that have adapted to living in sand with saline atmospheres and tidal flow. Cord grass, glasswort or maritime purslane, among others, have an important presence, whilst in the transition of the marshland into dry land there are grasses such as rostraria and barren brome.

On the intertidal plains, rich in nutrients, there are submerged meadows of gracilaria and algae, such as ulva linza and the sea lettuce. These seafloors, rich in food, half way between The Strait and the Doñana marshes, play an important role in the migratory movements of birds, enabling many birds to winter on the coast

In the area and endemic to Andalucia are Armeria gaditana, Taraxacum gaditanum and Hymenostemma pseudoanthemis, the latter two are recorded as vulnerable on the list of endangered plants.

Enclaves of Stone pine, (Pinus pinea) including a woodland of 6 hectares at Sancti Petri. Edible pine nuts are collected from this species. These forests are a sanctuary for birds such as blackbirds, robins, owls and kestrels, as well as for chameleons, amphibians and mammals like the European hedgehog and the dormouse.

There are a great amount of aquatic birds like grebes, cormorants, gulls and gannets. White stork, herons and avocets nest here. Flamingo and osprey can also be observed. Invertebrates such as shrimps, crabs, clams, cockles along with the fish sole, sea bream, grey mullet and sea bass are abundant. It is an important breeding ground for many commercial species of fish and crustaceans.

Phoenician and Roman remains. Numerous galleons sunk off the coasts.

The site is surrounded by urban centres of around 400,000 inhabitants and the Cádiz port. This of course creates urban, tourism and leisure environmental pressures on the protected area.

The Visitor Centre of the Bay of Cadiz Nature Reserve is in San Fernando (Cádiz). The recently built facilities, a model with regards to sustainability, are located at the Salina of La Leocadia, opposite the camposoto beach. The ideal place for a visit to this Nature Reserve, as its facilities offer you diverse information on the area and the activities possible there.