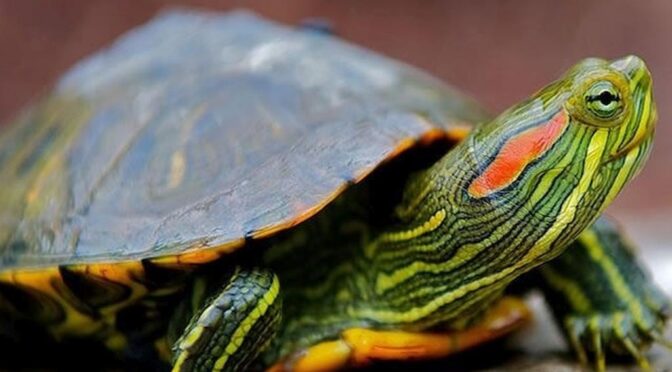 It is a subspecies of the “pond slider” (Trachemys scripta.) Read more about this invasive species at IUCN

The red-eared slider gets its name from the small red stripe around its ears and from its ability to slide quickly off rocks and logs into the water.

It was at one time, and probably still is, the most popular pet terrapin in the the world and hundreds of millions were sold worldwide during the 80’s and 90’s

In Spain this Invasive species, the red eared terrapin was available in pets shops across the country and also given as prizes (like a goldfish in the UK) in fun fairs. (The perfect prize given that they were small, easy to maintain and were very cheap to buy.)

Of course once they grow too big what is the answer? The very best scenario is that the turtle ends up in the garden pond of a family member or friend. But most of the time, the terrapin, is released into a local river or lake (with of course all the other “local” terrapins.)

The red-eared slider is included in the IUCN red list of the 100 most harmful invasive exotic species in the world, and is now banned from being sold in Spain (and most of the European Union)

However, a loophole in the law allowed the issue to continue when commercial companies in the United States switched from the red eared terrapin to the yellow-bellied slider (Trachemys scripta scripta) for European marketing.

This loop hole was closed quite quickly but not before many hundreds of thousands of yellow-bellied slider (Trachemys scripta scripta) were also introduced into Europe.

In the Iberian Peninsular the red eared terrapin has become a very damaging and invasive intruder and is the main reason that the European pond terrapin (Emys orbicularis) a native species to Spain is struggling to survive. (Along with habitat destruction and general pollution.)

The Mediterranean terrapin (Mauremys leprosa), also native to Spain seems to be coping better with the onslaught of the Red eared slider but still, its numbers are reducing.The Red-eared slider is larger in size and much more aggressive. Their strength allows them to take the best areas of sunbathing, to defend themselves better against possible predators and hunt more efficiently.

Time will tell but right now in many places across Spain, in rivers and lakes the red eared terrapin seems to be winning the battle. A lesson to be learned no? You can’t introduce a species into a new environment without some form of change in the hierarchy of the area.