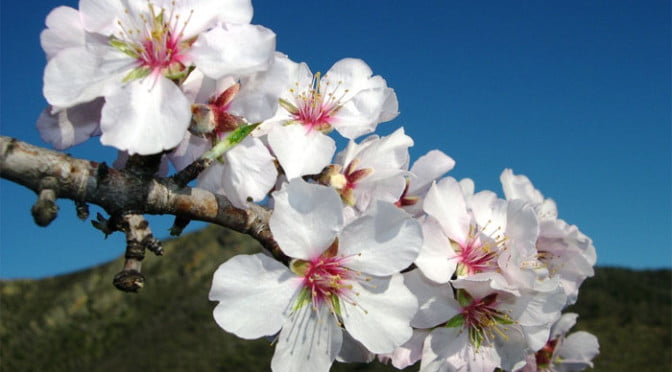 February Wildflowers are always a welcome sight, especially through the winter months, as coupled with the birds beginning to sing they show us that spring is near. Almond trees in blossom are the most noticeable in shades of pink and white, along with the Paperwhite narcissus, Branched asphodels and Broad-leaved iris as each can create swathes of colour across pastures. The much smaller flowered Andaluz storksbill and field marigolds also cover  large areas in pink and golden yellow.

Narcissus baeticus (Also known as Narcissus assoanus subsp. praelongus) A small and scented yellow narcissus with up to five flowers per stem held on long, sometimes curved, tube. They are found in small clusters or scattered in an open colony. The leaves are grooved on the upper side, rounded beneath and lax in habit. This bulbous plant grows in rocky limestone grasslands, dry pastures, in mountainous areas. Distribution; endemic to Andalucia in the Baetic mountain range.

Giant orchid (Himantoglossum robertianum)
This is the earliest orchid to flower in our area, it earns its name by reaching 50cm in height. The overall flower colour is pink – purple, with occasional white – green forms. The basal rosette is made of large dark green leaves, the finer upper leaves clasp the scape (flower stem). Found scattered on grassy slopes, roadsides, amongst scrub and in light woodland. Distribution; much of the Mediterranean area, excluding the east. (Previously Barlia robertiana)

Branched Asphodel (Asphodelus ramosus)
The white flowers have a pinkish – brown stripe through the back of each tepal, most noticeable when in bud. (Tepal describes both petals and sepals when they look equal). The flowering stem is around 1metre tall with many branches, but none longer than the central raceme. Each branch is covered in multiple flowers, each backed by a whitish papery bract. The leaves are grey / green, strap like and form a dense clump at the base. As they are not palatable to animals, pastures can be over taken by them. Found on rocky slopes, waste ground, open pine forests and roadsides. Distribution; Mediterranean Region.

Sombre bee orchid (Ophrys fusca)
This is the earliest of the Ophrys group of orchids here. Individuals are not easy to spot due to their dull colours blending well into the landscape, but it can form large colonies. The flower spike holds between 3 to 10 flowers, the sepals are generally green, concave, oblong to oval, the petals are shorter, green/yellow and narrow. The lip is tri-lobed, the central lobe is the largest and notched at the base; the smooth upper area has a blue/grey pattern like insect wings, the lower area is a reddish brown and covered in velvety hairs like a bee. Some have a yellow outer trim, and there are many variants. Found scattered on grassy slopes, roadsides, amongst scrub and in light woodland. General distribution of Ophrys fusca is the Mediterranean Region, with many isolated subspecies.

Friars Cowl (Arisarum simorrhinum)
The heart shaped leaves sit close to the ground in a patch or clump, hiding within is the unusual inflorescence. The brown and white spathe is an upright tube, curled over at the top with a bulbous tipped spadix in the mouth. It can be found in stony areas and in rock crevices. Distribution; South and east Spain, NW Africa

Andaluz Storksbill (Erodium primulaceum)
A multitude of these plants can cover the ground creating a pink carpet. Recognised by the five pink petals which are uneven in size; the two shorter, upper petals usually have a dark purple mark at the base. The leaves are finely pinnate. It is most frequently seen creating a matt at ground level, but occasionally growing to 50cm -if competing with grasses. Open ground, uncultivated areas. Distribution; Southern Spain, NW Africa.