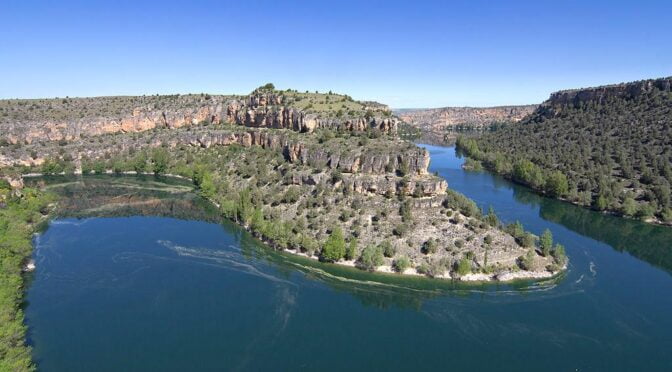 Hoces del Rio Duratón Natural Park (Spanish: Parque Natural de las Hoces del Río Duratón) is a natural park close to the town of Sepúlveda in the province of Segovia. Its name refers to the Duratón River and “Las Hoces” refer to the series of 100m high gorges that were formed over milenia by river erosion.

This area is famous for its nesting colony of griffon vultures (over 600 pairs with excellent breeding results each year.) The sheer cliffs of the gorge have created the perfect nesting site for these amazing carrion birds and the huge plains and mountains surrounding this area obviously have a plentiful food supply.

In the protected area of the Hoces del río Duratón Natural Park there are different habitats depending on climatic conditions and soil differences. Almost 600 species of flora have been recorded and three different and determined zones can be distinguished.

The moorland area: This occupies most of the surface of the park and is located in the upper area, where the soil is dry and poor. Here we can find common juniper and prickly juniper with thyme, gorse, sages, lavenders and other scrubland plants. The junipers in particularily have been badly affected by badly thought out farming practices over the years and in many places they have naturally been been replaced by the more resilient thyme and gorse. In some areas, particularly in the southwestern area there are resin pine plantations although today they are practically abandoned.

The Cliffs or rupicola ecosystem: The vertical walls up to 100 metres that make up this area of ​​cliffs and ravines hold very little soil and hold even less water. Searching the cracks and crevices and with the use of decent binoculars one can find Sedum acre , S. dasyphyllum and S. sediforme). If you look closer to the griffon nest sites other plants appear to be making good use of the nitrogen rich areas of excrement. Maidenhair ans Asplenium amongst others. Larger shrubs also cling to the cliff side such as pistacio terebinthus, black hawthorn and fig tree.

The bottom of the canyon or the riparian ecosystem: At the bottom of the canyon the soil content is far richer and water more available so we find alders, willows, poplars, elms, ash and chestnut trees. amongst these grow the larger shrubs such as dogwood, elderberry, blackberry, wildrose, blackthorn and hawthorn. other fruiting trees can also be found such as walnut, plum, almond, cherry and hazelnut.

The different habitats in the park make for a great wealth of fauna and birdlife (especially the griffons) stand out from the rest with almost 200 species listed for the area. there is however over 300 other species of non-ornithological fauna

Barbels and carp found in the reservoir area are also abundant in the river along with common trout. There is a healthy population of otters that have been reproducing well over the years.

Among the amphibians and reptiles are common frogs and toads and the more unusual midwife toad. Viperine snake can be seen in the river hunting and if you are lucky a ladder snake searching for eggs on the cliffs.

There are around 195 nesting and migrating species, distributed by the different habitats that occur in the park:

The cliffs along the gorge are used by many species of birds to nest. Griffon vultures are most common and stand out due to their size and number. This natural park hold one of the largest reproductive colonies in Europe at around 600 pairs . Other species of birds of prey that stand out are egyptian vulture, peregrine falcon, kestrel, eagle owl, goshawk and golden eagle. Along with the raptors there are corvids such as the jackdaw and red-billed chough.

In the moors that surround the canyon on the higher plateaux steppe birds are observed. Dupont’s lark, red legged partridge, shrikes and thrushes are also found in places with more vegetation.

In the pine forests of the southwest area birds of prey such as goshawk, sparrowhawk, booted eagle, kites, (both black and red), Eagle owl, little owl, tawney owl and long eared owl.

Birds present at the bottom of the canyon or riparian ecosystem are blackbirds, finches, nightingales and robins that feed on the ground and in the trees. There are also warblers, woodpeckers and nuthatches that feed on the trunks of trees..

Also at the bottom of the canyon there are other birds such as goldfinches, golden oriole and closer or in the water we can find kingfisher and dipper, warbler, white and gray wagtail Mallards, teals, cormorants and herons.

The area of ​​the Parque de las Hoces del Río Duratón has been occupied by man since prehistoric times . The oldest finds are Neolithic ceramics dating from 3000 BC. The known settlements belong to the Copper Age (2000 BC) while the cave paintings (of the so-called schematic art ) as well as the vast majority of finds are from the Bronze Age (about 1000 years BC .). The site of El Solapo del Águila, in the Corral de Muñecas has the highest concentration of cave paintings in the park, is especially relevant and worth a visit. (ask in the visitor centre (see below)).

Within the natural park there are several monuments of interest. The hermitage of San Frutos stands out, which is located on a rocky spur over one of the gorges, and the monastery of Nuestra Señora de los Ángeles at the bottom of the canyon.

Also relevant are the ruins of the Visigothic hermitage of San Julián, excavated in the rock, and the cave of the Seven Altars. (a natural cave inside which is a Visigoth religious monument from the 7th century . It is estimated to be the oldest Christian temple in the province of Segovia.It is located on the right bank, near the Villaseca bridge, about 100 m upriver, raised about 10 m from the bottom of the canyon (currently you go up some stairs). A gate protects the entrance and the key is kept in the nearby town of Villaseca)

This is the best place to head for to find out more about the park and the general area and is in the town of Sepúlveda. (They have a tourist website only in Spanish.)
http://www.turismosepulveda.es/oficina-de-turismo

The interpretation center of the Hoces del Río Duratón natural park is also located in the village of Sepúlveda. The old church building has been restored and adapted and consists of an audiovisual room and an exhibition that allows to obtain a complete idea of ​​the protected natural space.

There is an information service and also this is where you get permits to walk in the restricted areas of the park.

There are several different points that are of special importance because they allow you to appreciate views of the park. The most outstanding viewpoint of all is that of the hermitage of San Frutos. Other viewpoints are: