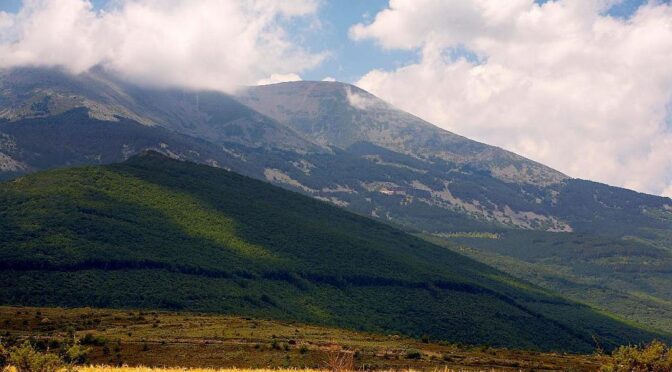 The Moncayo Natural Park (once called the “Dehesa del Moncayo Natural Park”) is a protected natural area located in the province of Zaragoza on the border with the province of Soria. It occupies part of the regions of Aranda, Campo de Borja, Tarazona and Moncayo. Moncayo itself is a 15 km long and about 7 km wide mountain chain and the highest summit, San Miguel (2,314 m), is the highest point in the 500 km long sistema Ibérico. The Moncayo massif also includes two other peaks that are almost identical and are located close together. They are the Cerro San Juan (2,283 m) and Peña Lobera (2226 m).

The area has quite a few walking / hiking routes and one of the most famous starts from the village of San Martín de la Virgen de Moncayo and finishes at the village of Agramonte. (See information centres below)

Find a hotel in the Moncayo Natural Park

The lower slopes are mainly a covering of mixed scrubland and holm oak. and at higher altitude these are replaced by beech, juniper, willow, gorse and heather. There are also planted pine forest interspersed with native forest of scots and black pine. Peaks are mostly bare of trees and lower growing “alpine” shrubbery is well developed. (Especially heather and gorse).

The mixed scrubland and lush vegetation of the Moncayo area is the perfect habitat for birdlife. (Over 100 species). This is a lesser visited natural park of Spain and also hunting is very restricted thus creating a unique and biodiverse habitat. This park is where I have had the best sightings of Golden eagles! 🙂

Of the 228 species of butterflies known in Spain, 127 inhabit the Moncaya Natural park. May to August are the best months with most species on the wing during this time.

Mammals include wild boar, red deer, genet, mongoose, fox and wild cat though they are fairly secretive and can be hard to find.

The Garnacha Wine Route includes the larger villages of Campo de Borja, Vera de Moncayo and El Buste but in total there are 20 villages linked by vineyards and The Museum and much more information can be found inside the Monastery of Veruela. This should be your starting point for the route around Moncayo vineyards.

In Tarrazona, the Cathedral ‘Santa María de Huerta’ stands out, a beautiful mosaic of architecture styles whose origins date back to 13th century. Gothic, Mudejar and Renaissance fuse together in which is considered to be one of the mosy beautiful Gothic cathedrals in Spain.

The tourist office in Tarrazona should be number 1 on your visit list. The staff are friendly and very helpful. Excellent information about walking and hiking in the area.

Situated on the ground floor of the town hall building in the Plaza de España this centre has an excellent exhibition about the natural park and mans influence on the environment. There is also an audio visual projection showing many aspects of the MoncayoNatural Park.