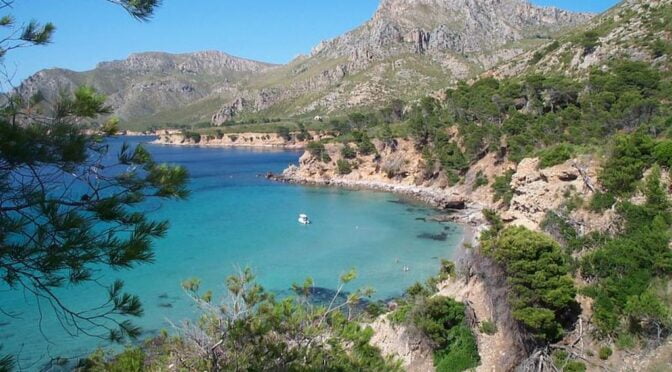 Walking and wildlife holidays in the Balearic islands

The Balearic Islands are an archipelago in the western Mediterranean Sea. They are off the Spanish coast near Catalonia and the Valencian Community. There are 7 Natural Parks and 1 National park in the Balearic islands

Also known for the popular tourist destinations of Ibiza and Majorca, these islands have so much else to offer due to each being a unique biosphere.

Protected nature zones cover a total of 2000 km2 of land, which is 40% of the total surface of the archipelago

The landscapes vary widely, not only from one Island to another, but also within the Islands.

Majorca has a surprising diversity of natural habitats and ecosystems. Eleonora’s falcon colonies live on the rocky cliffs. There are about 1,500 different flower and plant species on the island of which 40 are endemic.

Red kite and the Egyptian vulture are common on Menorca, it is also one of the few sites to view Mediterranean tortoise (Testudo hermanni) in its natural habitat. Majorca for example accommodates rough mountain ranges on one side and much gentler hills on the other side, with some wide plains, green forests and many olive or orange groves in between.

The Balearics has some 250 pairs of Eleanoras falcon nesting during the summer. This is the Iberian stronghold of this highly specialized falcon. Most of the colonies are on the steep cliffs of north-west Majorca on cliff-ledges or in rock crevices.

Have you visited any on these natural Parks? send us some feedback by leaving a comment.

1 Cala dhort cap llentrisca Natural Park Since its declaration as a protected natural area in February 2002 , the park has undergone several modifications in terms of its extension and protection. Both the Sa Talaia area, in 2003 , and the public estate of Ses Païses de Cala d’Hort, in 2005 have been removed and is currently reduced to the islets and the marine environment. As a result of these changes the area is now called Es Vedrá, Es Vedranell and Islotes de Poniente Nature Reserve.
2 Ses salines d eivissa Natural park Located between islands of Eivissa and Formentera, the Ses Salines d’Eivissa i Formentera Natural Park covers the channel that separates the two islands and also part of the land masses and salt mines. This Natural Park is a prime example of the Mediterranean’s rich biodiversity. it is a rest area and a nesting ground for countless birds, along their migratory paths. The area includes a diverse range of land and marine habitats of great ecological, landscape, historical and cultural value.
3 Sa dragonera Natural park This uninhabited island off Mallorca’s western tip was the focus for a turning point in environmental protection. In 1977 it was occupied by environmentalists protesting against a planned tourist development. The campaigners won and the island has been protected ever since along with the nearby islets of Pantaleu and Isla Mediana.
4 The Cabrera Archipelago Maritime Terrestrial National Park The Cabrera Archipelago Maritime Terrestrial National Park includes over 90,000 hectares containing the whole of the Cabrera Archipelago and open water habitats, mainly over the Emile Baudot Escarpment which is prime habitat for many creatures, including whales, dolphins and turtles. It is located to the south of Mallorca, ten nautical miles from the port of Colonia de Sant Jordi (ses Salines).
5 Cala mondragón Natural Park In the “garrigue” The Hermann’s tortoise (Testudo hermanni) is present and some hundreds of specimens have been reintroduced in recent decades.
6 Peninsula del llevant Natural Park The park’s fauna include populations of Hermann’s tortoise (Testudo hermanni), Algerian hedgehog (Atelerix algirus), genet (Geneta geneta), pine marten (Martes martes) and the Balearic green toad (Bufo balearicus).
7 S albufera de mallorca Natural Park. Water is the basis of S’Albufera’s great biodiversity. Water and soil moisture allow vegetation to grow continuously, which varies depending on depth, proximity to the sea and the nature of the soil.
8 S albufera des grau This protected natural environment includes vastly diverse habitats with varying degrees of human intervention such as wetlands, agricultural and livestock areas, forests, a coastline of cliffs and beaches, islets and a marine environment. The lagoon is separated from the Mediterranean sea by sand dunes and is fed by three streams.

Find a hotel in the Balearic Islands