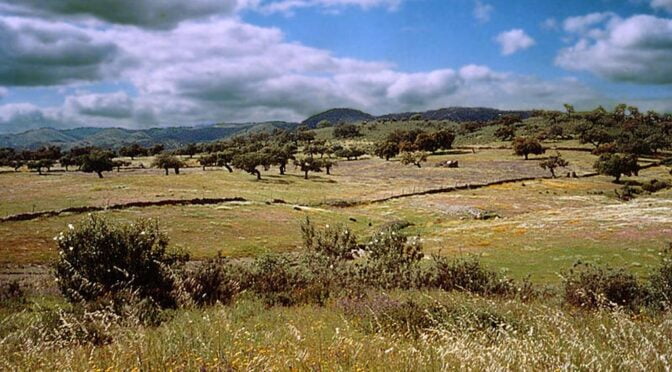 Located in the far west of the Sierra Morena Mountains, in the north of the province of Huelva, the Sierra de Aracena y Picos de Aroche Natural Park is characterised by its extensive forest, high rainfall, mild climate and interesting natural and cultural heritage.

Dense forest covers most of the park due to the humid climate which has an Atlantic influence. This is the western end of the Sierra de Morena mountain range, close to the Portuguese border. Oak and Chestnut are the main tree species with meadow pastures which are grazed by Ganado Bravo, fighting bulls. Cerdo Iberico, a breed of black pig from Iberia, is raised in the pastures and feeds on the acorns giving it a distinct flavour.

The village of Jabugo, one of the 28 within the park, produces world renowned Jamon Iberico products. The museum of ham in Aracena is well worth a visit. (Not for vegetarians though)

There are two reservoirs (Embalse) in the The Sierra de Aracena and Picos de Aroche Natural Park. The Embalse de Zufre and Embalse de Aracena.

Grutas de las Maravillas (Website in Spanish here) is a limestone wonder with tremendous stalactites and stalagmites and more than 2km of caverns including 6 lakes. The entrance for visitors is in the town of Aracena which is also known for its 13thC Templar church and ruined castle.

The most ancient European copper mines are located south of the village of Riotinto. They were worked since Phoenician times and presently there is a fascinating museum and narrow gauge tourist train visiting the open cast mines. (Website here in Spanish)

Molino Río Alájar is located in the Sierra de Aracena y Picos de Aroche Nature Reserve. It is a collection of 6 charming cottages with a shared pool and tennis courts.

The property offers a wide range of activities, including flamenco guitar lessons, Spanish lessons and tennis coaching. It also organises hiking and bird watching walks in the nature reserve.

Click here to find out more about Molino Rio Alajar.

The Cabildo Viejo visitor centre is in the centre of Aracena and occupies a historic building erected in the 17th century. Its name stems from the fact that the building was also once the seat of Aracena’s first town council. The house’s size and beauty give us some idea of the historic importance of Aracena in this area. The interpretative exhibition inside the centre focuses largely on the heritage, traditional crafts and gastronomy of the Nature Park.

The tourist office in Aracena has a very helpfull set of staff and speak English. They can point you in the right direction whether you are looking for tickets for the cave, a tour of the ham museum or other attractions in the area. Just follow the signs in the town for “Oficina de Turismo“