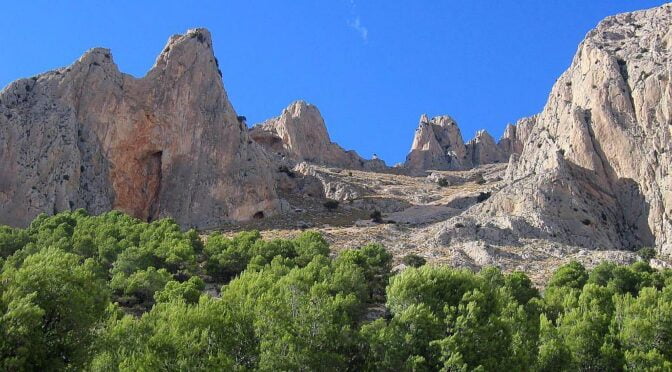 Prices and entries to the cave see here.
https://www.andalucia.org/en/velez-blanco-cultural-tourism-cueva-de-los-letreros

La Cueva del Gabar, to the north of Velez Blanco contains well preserved paintings and tours are only taken with a guide. Ask in the tourist information office at Vélez Rubio, or the town hall at Vélez Blanco. Because of the difficulty of access the drawings and paintings in the Gabar cave are better preserved.

Native Laricio pines (Pinus nigra subsp laricio) grow on the north-facing slopes with Aleppo pine (Pinus halepensis) plantations. Some of the trees are thought to be 100 years old. The scrub includes Gorse, Prickly and Phoenician juniper, Rockrose, Rosemary, and Lavender. In cooler, damp gullies are Gall oak groves and Hawthorn. In the hedgehog zone are Hedgehog broom (Erinacea anthyllis), pinky, white-flowered crucifer Hormathophylla spinosa and the yellow-flowered Vella spinosa. Lower down on these slopes are Junipers, Maples, Spanish barberries and Hawthorn.

The Sierra de Maria-Los Velez is of a limestone formation and holds some of the plants endemic to the Cordillera Baetica as well as two only found in this particular park. Sideritis stachydioides growing on rocky slopes has pink flowers, the leaves and stems are covered in white protective felt. The yellow flowered Centaurea mariana grows in rock crevices. Other protected species are Atropa baetica, Hormathophylla cadevalliana, Sideritis x velezana, Centaurea x piifontiana and Moehringia intricata.

The large birds of prey that can be seen (depending on the time of year) include short-toed, booted and golden eagles, as well as goshawk, sparrowhawk, common buzzard, peregrine, lesser kestrel and eagle owl.

Red billed choughs prefer high rocky outcrops along with rock thrush and blue rock thrush. Crag martin and alpine swifts swirl in the sky while in the woodlands are crested tits, goldcrests, long-tailed tits and short-toed treecreeper. Listen out for the colourful bee-eater or hoopoe. There are a growing number of steppe birds that will interest ornithologists. meadow pipits, crested, thekla, short-toed and calandra lark, skylark, and woodlark, stone curlew, little bustard and black-bellied sand grouse. Many warblers, including reed warblers and ñightingales inhabit the riverside vegetation.

Reptiles include ladder, montpellier snake and also ocellated lizard. Among the amphibians are common toad and natterjack toad.

The spur-thighed tortoise (Testudo graeca) which lives to the south of the Sierra is in danger of extinction. There is a breeding centre for these tortoises in the north of the park at Las Almohallas.

Two butterfly species that stand out are Parnassius apollo mariae which can only be found in these sierras and Pseudochazara hippolyte subsp. williamsi which is endemic to south east Spain (Nevada grayling). Iolas blue (Iolana iolas) is also a noteworthy resident of the park

This visitor centre is located in the village of Vélez Blanco in a former wheat store . Its exhibition provides information about relevant aspects of the Sierra María-Los Vélez Nature Park, such as the paintings, engravings, fortress and palaces left behind by the different cultures which have inhabited this frontier area over the centuries. Near Almacén de Trigo there is a footpath called the Cueva de los Letreros trail, leading to one of the most important cave painting galleries in the Iberian Peninsula. Here visitors can see the artwork described in the centre for themselves.

Mirador de la Umbría de María visitors centre (mirador meaning viewpoint).Take the A317 towards Orce and 2km out of María there is a right-hand turn off the main road.

This botanical garden lies amid the dense vegetation of the shaded slopes of Sierra María. The facility, which is part of the Red Andaluza de Jardines Botánicos, the Andalusian Network of Botanical Gardens, provides information about the flora of the Nature Park.