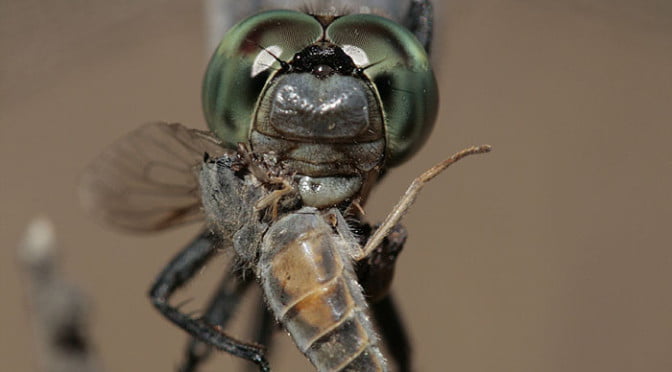 Summer time is when many insects reach the adult phase of their life. They may have spent months, even years as a larva, drab in colour and unable to move far, possibly living underwater or underground. Now, in this last stage of their lifecycle, they might be brightly coloured, able to fly or to emit sounds and so they become more obvious to us. Insects are a very important part of the food chain on which we depend.

We also rely heavily on insects for their ability to pollinate much of our food crops, and so they deserve at least a moment of our time. Here is a tiny selection of those that might gain your attention within the natural park area.

Southern Swallotail (Iphiclides feisthamelii) Of the many butterflies on the wing during June, the Spanish Swallowtail will catch your attention due to its large size. Their main colour is a pale creamy-yellow with striking black stripes. If you can get close to one when it is stationary, then look for the red and blue scales on the hind wing, near its long ”tails”.  These bright “eyespots” attract the attention of a hungry bird, if the bird successfully grabs the false eyes, then the butterfly will lose a piece of its wing but perhaps get away with its life.

According to some authors it is a species in its own right rather than a subspecies of the Scarce Swallotail (Iphiclides podalirius) The larvae (caterpillars) feed on wild or domestic fruiting trees such as Blackthorn (Prunus spinosa), Cherry (Prunus cerasus) and Apricot (Prunus armeniaca) and so are often associated with gardens and orchards.

Orange-winged Dropwing (Trithemis kirbyi) A brightly coloured dragonfly which has only recently made its home in Spain. This species is expanding its territory northwards from North Africa into southern Europe. The eyes, body and legs of the male are bright red with large patches of amber at the base of all four wings.

Although fast flying when hunting or patrolling, they will often rest on a rock, a stick, or open ground beside a body of water. Their favourite areas include swimming pools, rivers with rocky bases and small irrigation ponds. At rest they may lower their wings which give rise to the common name of “dropwing”. Dragonflies hunt small flying insects and will often dash out from their perch, catch something and return to their resting spot to eat it.

Cicada (Cicada orni) These are well camouflaged insects and you will only notice their presence by the powerful call emitted by the males to attract the females, a sound which accompanies long hot summer days. If you are inquisitive enough to search for them, you will notice that they often go quiet as you approach.

Their overall length is approximately 2.5cm, they have bulbous eyes which are set wide apart and their transparent wings are decorated with black veins and several spots.

The adults feed on tree sap which is why they usually rest on tree trunks. They have a long proboscis which is tucked underneath the body and is not easily seen. The females lay their eggs in the late summer or autumn. As an adult they live for 1 or 2 months, whereas the larvae will live underground for several years, feeding on moisture from plant roots. This species is common in southern and central Europe

Andalusian Bushcricket (Steropleurus andalusius) Although this is a sizeable bush-cricket (20 to 35 mm) which often sits up in branches of shrubs, unless you are scanning the plants it may go unnoticed. They vary from straw coloured to brown or green, each with yellow along the sides.

On this species the head is bulbous, the antennae emerge from close below the eyes and they have vestigial wing buds (the yellow area just behind the pronotum). Found in dry, scrub areas of Andalucía, they are omnivorous; eating such things as leaves, eggs and caterpillars.

Bush-crickets: have very long, fine antennae. The long, sabre-like appendage is not used in defence, this is only seen on the females and is called an ovipositor; used to place the eggs into soil or plant material – depending on the species.

Red-striped Oil Beetle (Berberomeloe majalis) This is an unmistakeable beetle due to its distinctive size, shape and colour. The body is up to 6cm in length, black and ringed by red (or orange) stripes, hence the common name. These are warning colours, and this species is also known as a type of blister beetle; as a defensive mechanism it can excrete oil along its body that will blister skin on contact.

These heavy bodied beetles are unable to fly and will drag their abdomen along. As adults they eat plants and can climb surprisingly well. They live in sandy habitats where the female can dig a hole to lay hundreds of eggs in the soil. Once the larvae hatch, they emerge from the soil and climb onto a flower. Here it will wait for a solitary species of bee; if lucky it will latch onto one and be carried back to where she lays her egg. The young beetle devours the egg and pollen food store, giving it the energy it needs to then develop into an adult beetle itself.

Egyptian Grasshopper (Anacridium aegyptium) This is the largest grasshopper we have in this area and to see it fly is impressive.

Size alone of the fully grown adults is enough to recognise them, you can also identify them by the vertical dark stripes in their eyes and they usually have a pale orange line along the pronotum; a shield like cover behind the head. The size of the adult can vary from 30 to 70 cm, with the males being smaller than the females.

The nymphs are similar in appearance to the adults, although their abdomen is more visible as the wings develop only a small amount with each moult that they undergo. The colour of the youngsters is varied and can be sandy, green or ochre.

At Wildside Holidays – Grazalema we work only with local people who know every inch of this area and can offer you an authentic ‘Grazalema’ experience.  We offer airport transfers, accommodation, knowledgeable local guides, the best Spanish cuisine and all the information you need to really explore and enjoy this amazing natural park in western Andalusia.