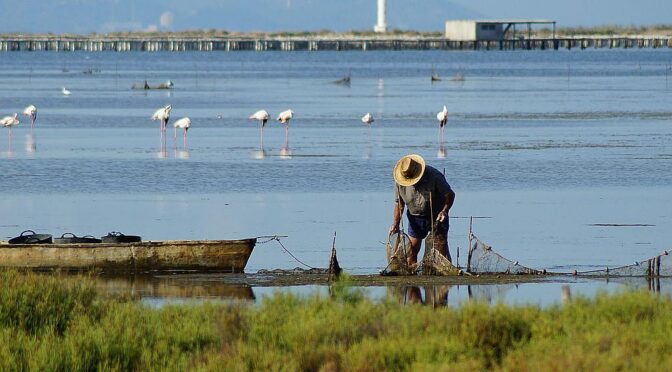 The Parque natural del Delta del Ebro holds a great importance internationally as more than 300 species of birds (of the 700 that exist in Europe) have been observed at the Delta. This includes resident, pre and post-nuptial migration as well as wintering flocks. It is the second largest wetland in the western Mediterranean. (The first being the Camargue in France.)

This river outlet has been shaped over centuries by sea storms and river flooding and around 45 percent of the delta is less than 50cm above sea level. It is consantly being created and reshaped by sediment build up from river flooding and sand deposit/erosion from wave action. There are two large, shallow coastal lagoons partially enclosed by long sand spits, El Fangar and Els Alfacs. These shallow bays, salt marshes, fresh water springs, reed beds, dunes, sand bars and islands are habitats that are further protected as Reserves within the park area.

Man has adapted most of the delta area by planting rice fields fed by a network of irrigation canals. These, along with the salt pans, add to the natural ecosystems for the fauna when cared for correctly. Surrounded by an area of human exploitation the diverse wealth of the delta continues through the protection of the park status.

The Park can be subdivided into nine basic zones of interest.

Thick reed-beds are seen where the water table is high and the area is frequently inundated. The most characteristic plants include Common reed (Phragmites australis), the taller Phragmites australis subsp. chrysanthus and pink flowering Sea Bindweed (Calystegia soldanella).

Two plants that grow here which have been used for traditional weaving crafts are Great fen-sedge (Cladium mariscus) and Bulrush (Typha sp).

Approaching the sea this woodland is replaced by Oleander (Nerium oleander) and Tamarisk species.

The list of birds within the park is extensive, however those that are most famed are the Audouin’s Gull (Larus audouinii), a rare bird which has its largest breeding colonies here as a summer visitor along with Squacco heron (Ardeola ralloides), Purple heron (Ardea purpurea) and Montagu’s Harrier (Circus pygargus).

Amongst the lizards are Spanish psammodromus (Podarcis hispanica) which are more frequently seen than the Spiny-footed lizard (Acanthodactylus erythrurus) and the Spanish Sand Racer (Psammodromus algirus). Moorish and Turkish geckos (Tarentola mauritanica and Hemidactylus turcicus) can be seen around buildings.

Three themes: “Archaeology: from Prehistory to the Middle Ages”; “The Ebro, Waterway”; and “The Ebro Delta” can be seen at Montsià Museum in the town of Amposta. (Obligatory visit and very interesting!)

Many of the towns and villages in the area have their own municipal information centres and museums. (The Montsià Museum in Amposta is particularily interesting).

However, the obligatory place to find out how to get the best out of a visit to the Parque natural del Delta del Ebro is the Casa de Fusta.

The “Casa de Fusta” (Wooden House) is one of the most emblematic buildings of the Ebro Delta. It was built in the 1920’s by a group of hunters who settled in the delta attracted by the quantity and variety of aquatic hunting opportunities (ducks!) . Now it houses the Ebro Delta Interpretation Centre and the ornithological museum.