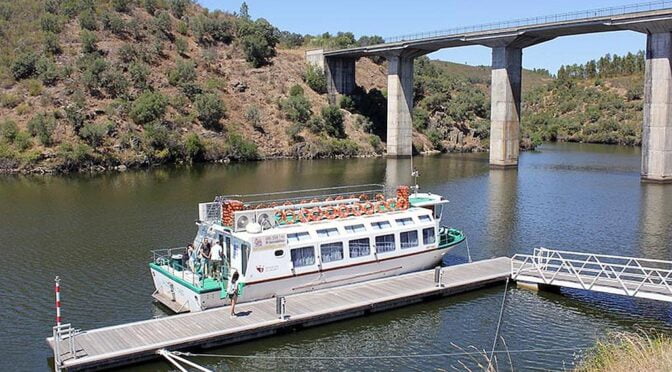 The river Tagus (known as the Tajo in Spanish and Tejo in Portuguese) is the longest river in Iberia. (1,038 kilometers in length.) Its source in the Albarracín mountains (near Teruel, south Aragon) and the city Lisbon, capital of Portugal, is placed at the estuary where it flows into the Atlantic ocean.

The Tajo International Natural Park boundary begins at the Roman bridge of Alcántara, encompassing the river and its tributaries as they travel westwards, to the dam at Cedillo. The river through most of the park forms a natural border with Portugal.

A corresponding protected area has also been created in Portugal, hence the name Tajo Internacional.

Tributary rivers included in the park are the Erjas, Salor, Rivera de Calatrucha, Aurela, Sever and Alburrel. Due to the steepness of the banks, as this is an artificially flooded area, access can be very difficult without a boat.

One of the main tourist attractions in the International Tagus National Park is a boat ride on the river aboard the Balcón del Tajo. https://barcodeltajo.com/ (in spanish) Ask in your hotel for information about boat trips on the Tagus river.

Of primary importance are the rare birds that find seclusion within the park. Of these the most threatened are the Black stork (Ciconia nigra), Black vulture (Aegypius monachus), Spanish Imperial Eagle (Aquila adalberti), Bonelli’s eagle (Hieraaetus fasciatus) and Golden eagle (Aquila chrysaetos).

The Cabrera vole (Microtus cabrerae) is a threatened rodent endemic in the Iberian Peninsula with a patchy distribution and specific microhabitat requirements, there are10 or so known colonies within the parkland. Otters (Lutra lutra) live along the river banks.

The white-clawed crayfish (Austropotamobius pallipes lusitanicus) is a subspecies endemic to Iberia. They live amongst rocks at around 1 metre depth, they are at risk due to water pollution and habitat changes with a status listed as vulnerable on the IUCN Red List. The European pond terrapin (Emys orbicularis) also inhabits the water courses here.

The bridge of Alcántara (Arabic for “The bridge”) was built over the river Tagus in A.D. 105 by the Romans using granite blocks under the architect Caius Julius Lacer. This monument of six arches is 57 metres high, 194 metres long and 8 metres wide spanned with a 14m high triumphal arch at the centre. It was dedicated to the Emperor Trajan with a small temple built at one end. The bridge was repaired by order of Wellington in 1812 as it became impassable, weakened partly by damage received by explosives in a battle here in 1809.

El Péndere is an Information and Visitors Centre and Nature Education Centre in Santiago de Alcántara. It is located in the El Péndere Chapel (13th century) and boasts an exhibition of the areas landscape and ecosystems, flora and fauna.

The Centre also offers guided tours (You have to book in advance) and has maps of walking tours in the area.