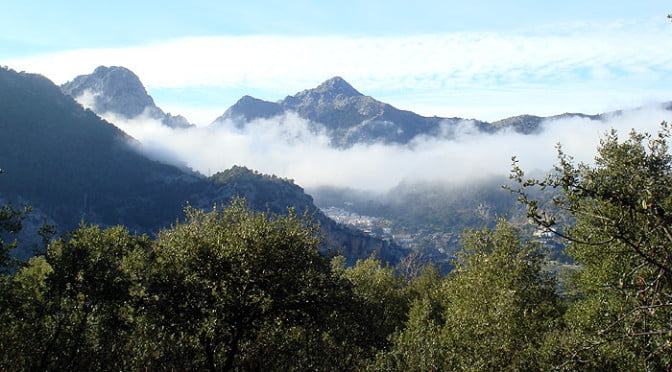 One of Spain’s most stunning natural parks. A fabulous location to spend time be it resting, walking, bird watching or photography.
Grazalema is to be found in the north east part of Cadiz province (at a height of 800m) in the mountain range bearing the same name Sierra de Grazalema. In 1977 this area was declared a “Biosphere Reserve” by UNESCO due to the exceptional variety and wealth of its fauna and flora. In 1984 it was made the first Nature Park of Andalucia by the Junta de Andalucia.

The parkland consists of 51,695 hectares of which the highest point is El Torreon at 1,654m. These limestone mountains form the western tip of the Cordillera Betica range and there is only low lying land from here to the Atlantic coast. A history of high rainfall has created the cliffs, crags, caves, sink holes, river  valleys and gorges that make the area so varied.

FAUNA and FLORA
Abies pinsapo:  Grazalema and Ronda have the last examples of these fir trees, living fossils that grew in the Tertiary period and still exist today.

Papaver rupifragum, Phlomis x margaritae, Echinospartum algibicum and Erodium recoderi are plants that are endemic to the park. These plants and many others, special to Andalucia, are best seen  in the collection at the Botanic Gardens in El Bosque.

There are 30+ different species of orchids that flower here, beginning in January with most peaking during the spring. Many can be easily seen at the road and path sides.

Large soaring birds, if seen in a group, are likely to be Griffon vultures. There is a large breeding colony in Garganta Verde. Eagles seen are Booted, Short-toed, Bonelli’s or Golden. There are also several Egyptian vultures breeding in the park. Other birds to look out for are Red billed chough, Lesser kestrel, Hoopoe, Bee-eater, Black-wheatear, Blue rock thrush, Rock thrush and Woodchat shrike.

There are around 80 butterflies listed for the park. The Two–tailed pasha, Cardinal, Cleopatra, Spanish Swallowtail, Large Tortoiseshell and Marsh fritillary are some of the largest and more easily seen.

2 thoughts on “The Sierra de Grazalema – A Walkers Paradise”