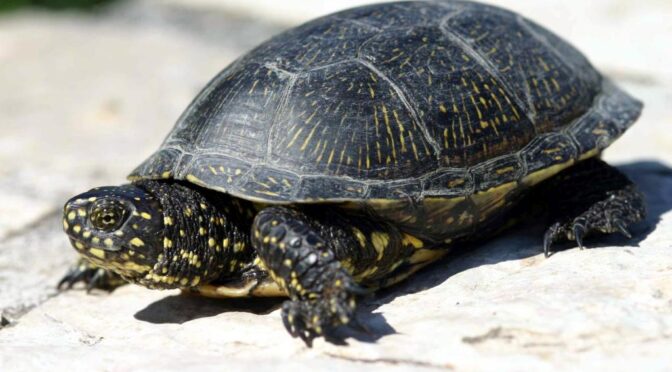 The shell of the European pond terrapin has a black coloured background with yellow radial lines or spots in each plate. This basic scheme is variable, with specimens that have a lighter background and dark radial markings. The plastron (underside of the shell) also varies in colour, which can be completely dark or have large yellowish spots. The skin colour is black, dotted with various yellow markings. The head is large, and the tail long, especially in the males. The shell is wider in the rear section, and can measure around 20cm (8 inches), although more frequently between 12-15cm (5-6inches).

They live in water courses which have a slow current with lots of submerged and floating vegetation. They are active from early morning and control their temperature by sunbathing on semi-submerged rocks and logs etc. If disturbed they dive rapidly, going to the bottom and hiding in the mud until the danger has passed.
This species is an opportunist, taking advantage of many food sources such as aquatic insects, larvae, amphibians, fish and carrion.

The breeding season begins in March continuing to July. Up to 16 eggs are laid days 20 to 71 days after copulation which are normally divided between 2 clutches with a 15 to 28 day interval. Hatching occurs after 55 to 78 days.

Far less frequent than Spanish Terrapin (Mauremys leprosa) The threats to this species are habitat loss, degradation and fragmentation, the capture of specimens for the pet market and the introduction of exotic species and especially the contamination of waterways.