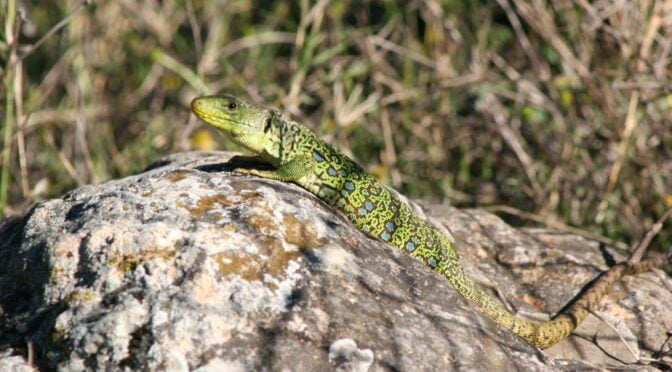 Including the Balearic and Canary islands, there are around 90 species of reptiles and amphibians in Spain.

Snakes can be difficult to observe as generally they are very shy and disappear into the undergrowth at the first sounds of a human approaching.

Some reptile and amphibian species in Spain are classed as threatened and endangered due to pressures on habitat and human persecution.

Distribution of these reptiles and amphibians can be across the entire Iberian peninsular or restricted to a realatively small geographic location. For example, the Viperine snake (Natrix maura) spans the whole of Iberia, whilst other reptiles are restricted in their area such as the Spanish Algyroides (Algyroides marchi) which is only found in the Sierra Cazorla.

The greatest numbers of endemic lizards are those isolated on the Canary Islands. Also of great interest are the subspecies of Lilfords lizard on the balearic islands

Finding and watching Reptiles and Amphibians in Spain

During the summer months, nocturnal lizards like geckos will delight people with their wall clinging abilities whilst hunting for moths attracted to lights. During the daytime look quietly at emerged rocks and logs along river sides to see sunbathing Mediterranean Pond Terrapins (Mauremys leprosa). They are sensitive to the slightest movement and will quickly dive for cover if they feel threatened.

Sadly, the Chameleon has lost a lot of its coastal habitat in the south of Spain due to the unlimited building boom. It is a fascinating reptile sadly unable to live inland away from the expanding concrete and suffers also from predation by domestic cats. This coastal housing growth also has a very destructive effect on breeding grounds of sea turtles and tortoise.

Below is a list of Reptiles and amphibians of Spain. (English name, Scientific name, Spanish name.) If the link is live (green text) then click to read more about the animal.

The are three separate populations of the Spur-thighed tortoise: