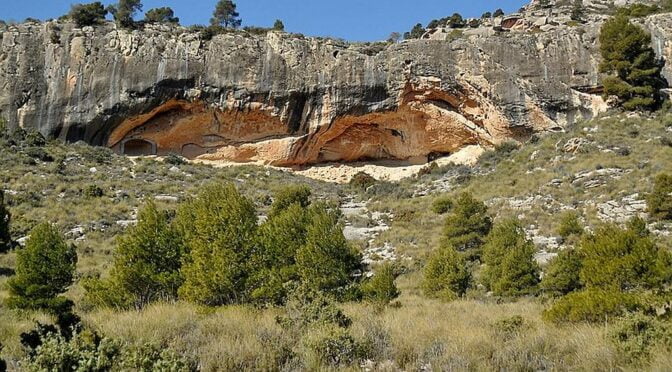 Some areas have been declared as Natural monuments (Monumentos naturales) in Murcia. A natural monument is a natural element of singular landscape, geological, historical or other value (even symbolic value) for example a hundred-year-old tree, a singular forest, a cave or an island. Natural Monuments are normally outside the limits of other protected areas such as natural parks.

Monte Arabí (Located at the town of Yecla)

Mount Arabí is a mountainous area located in the municipality of Yecla in the province of Murcia. Its altitude is 1068 meters above sea level.

The most remarkable natural values ​​of the Arabí are the important and unique geomorphological formations forged by physical and chemical weathering. The result is a characteristic honeycomb pattern. In addition to a karst modeling, forming lapiaces, chasms and caves, such as the Cueva del Tesoro and the Cueva de la Horadada.

Also noteworthy is the presence of a great diversity of fossil marine fauna, composed of shark teeth, echinoderms, brachiopods and bivalves. In addition, biocalcarenites with intercalations of hematoid quartz (red quartz), also called Compostela hyacinth can be found.

The Cantos de la Visera are two shelters with cave paintings that were discovered in 1912, both shelters are located on the eastern cliff of Mount Arabí. The paintings are in the naturalistic style of Levantine art and are approximately 7,000 years old. The site has been a World Heritage Site since 1998 under the name “Rock Art of the Mediterranean Arch of the Iberian Peninsula” .

A great video here showing this outstanding archaeological, biological and geological enclave. (I like the music too! 🙂 )

There is also an excellent archaeological museum in the town of Yecla with interesting exhibition covering history and legends of the area. https://turismo.yecla.es/archaeology/

Gredas de Bolnuevo (Located at the town of Bolnuevo)

The sandstone shapes are sculpted by water and wind over thousands of years and is formed by clay (gredas). The yellowish color is caused by the large amount of sand contained in the clay. The clay is made up of microfossils that date from the Pliocene period, about 4.5 million years ago. The sandstone has undergone an erosion process by the elements which resulted in mushroom and almost vertical shapes that seem to defy the laws of the gravity.

La Sima de la Higuera (Cave of the fig) is the third natural monument to be declared in the Region of Murcia. It is located north of Sierra Espuña, in the municipality of Pliego and has over 5 kilomtres of extension.

As you can see in this video, it is for experienced cavers only.

If you want to visit this cave then find out more on the official website here: http://www.simadelahiguera.es/ (In Spanish) or get in touch with the Murcia official tourist office here: https://www.murciaturistica.es/es/espacio_natural/espacio-natural-protegido-sima-de-la-higuera-6519/

Find a hotel near to Natural monuments (Monumentos naturales) in Murcia

One thought on “Natural monuments (Monumentos naturales) in Murcia”