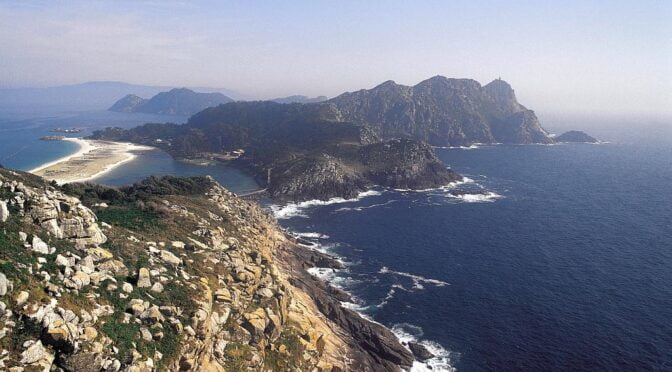 Walking and wildlife holidays in Galicia

Galicia is known in Spain as the “land of the 1000 rivers”. The people of Galicia are known as “Gallegos“.

Geographically situated just above Portugal in the north western corner of Spain and facing both the Atlantic Ocean and the Cantabrian sea. This part of the country has an economy based on fishing, farming, agriculture and more increasingly wildlife tourism.

Galicia is frequently described as “Green Spain”, a result of its temperate climate and elevated rain fall. The landscape is mountainous and peppered with manmade plantations of pine and eucalyptus.

Find a hotel in Galicia

The culture which left its imprint in Galicia is Celtic, while Romans left the walls of Lugo, the bridge of Ourense, and the Tower of Hercules.

In the Middle Ages, the discovery of a tomb, that of the Apostle Santiago (Saint James), brought many people. Thousands of pilgrims made their way to the cathedral of the newly founded town named Santiago de Compostela, and the world-famous Way of Santiago was formed.

Tours in Galicia from Viator

Galicia has a vast array of sites to visit and enjoy. Below are some of the options listed on the Viator website. (We recieve a small commission if you book a tour which doesn’t cost you more and helps us to keep Wildside Holidays up to date with the best information.)

The way is flanked with numerous churches, monasteries and chapels of historical value.

Have you visited any on these natural Parks?

Walking and wildlife holidays in Galicia

1 Fragas del Eume Natura Park The Fragas del Eume Natural Park is home to one of Europes best-preserved examples of a riverside temperate rainforest where oak such as (Quercus robur and Quercus pyrenaica) are dominant.The forest follows the course of the River Eume and Fraga is a Galician word for “natural or untouched virgin woodland”. The European Union has also recognised the park as a Site of Community Importance.
2 Dunas de Corrubedo y lagunas de Carregal y Vixán Natural Park The Dunas de Corrubedo y lagunas de Carregal y Vixán Natural Park covers about 10 km2 and is situated at the end of the Barbanza Peninsula between the Arosa and the Muros y Noya estuaries. Its international importance as a wetland has been recognised as a Ramsar site and the European Union has also included it within a Special Protection Area.
3 Islas Atlanticas National Park In Ons don’t miss the mysterious “furnas”, granite sea caves cut by the waves, such as the mythical “Burato do Inferno”, which was “believed to go all the way down to hell, and on stormy nights the voices of the dead could be heard”.
4 Monte Aloia Natural Park Located in the south of Pontevedra province the Monte Aloia Natural park (the first natural park in Galicia) is basically the summit of the Sierra de Galiñeiro mountain range.
5 Baixa Limia Serra do Xures Natural Park and, on the Portuguese side of the border, the Peneda-Gerês National Park are now joined to create the Gerês-Xurés Transboundary Biosphere Reserve (RBTGX) With an area of ​​267,958 ha, of protected territory in two natural spaces divided between Spain and Portugal.
6 Monte o Inverndeiro Natural Park can only be described as stunning with its peaks and valleys covered in grasses, large extensions of scrub, woodland and riverside habitat. The area receives maximum protection and admits a maximum of just 30 visitors per day so a permit from the park authorities is required in order to enter the protected area. (Ask about this in your hotel or other accommodation, maybe they can get the permits for you.)
7 Serra da Enciña da Lastra Natural Park has outstanding holm oak woods, ancient chestnut groves and Mediterranean scrubland with fields of wild thyme and flowering plants endemic to limy soil and more than 25 species or orchid. The gorges and sheer river passes are the habitats of birds of prey and other birds which make the park an interesting ornithological refuge. It has the largest concentration of nesting birds in Galicia and there are also large colonies of bats residing in the caves.