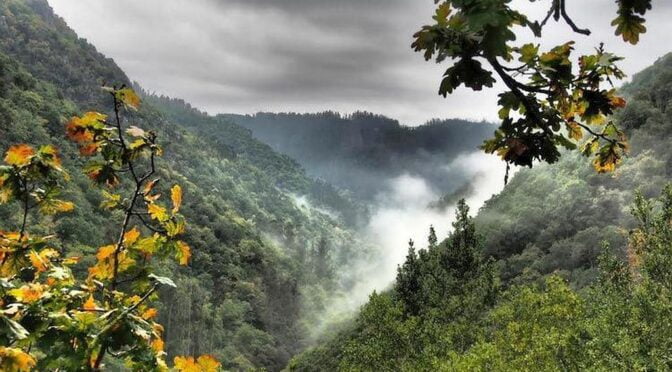 The Fragas del Eume Natural Park is home to one of Europes best-preserved examples of a riverside temperate rainforest where oak such as (Quercus robur and Quercus pyrenaica) are dominant.

The forest follows the course of the River Eume and Fraga is a Galician word for “natural or untouched virgin woodland”. The European Union has also recognised the park as a Site of Community Importance.

On March 31, 2012 a forest fire that began close to the village of Capela which affected part of the park. The Capela fire was set by vandals and spread thanks to the strong wind and the easy combustion of local plantations of pines and eucalyptus. The fire burned the upper part of the Eume canyon up to an altitude of about 300 meters and affected around 300 hectares of the Natural Park .

The use of private vehicles is restricted during Easter and the summer months due to the high volume of visitors in this period to both the Natural Park and the Monastery of Caaveiro. Head for the interpretation centre (See Information centres below) to find out about the transport service from the info centre to the bridge of Caaveiro and the monastery.

Located on a rocky mound between the Eume and Sesin rivers, the Monastery of San Xoán de Caaveiro close to the village of A Capella was founded in the tenth century by Saint Rudesind.

The dominant tree in the Fragas del Eume Natural Park is the oak (Quercus robur ). Other species appear more isolated but contribute fundamentally to the natural diversity of the forest, such as strawberry trees (Arbutus unedo). The chestnut trees (Castanea sativa), a species originally disseminated in European forests are currently few in number and are remnants from its cultivation during the Roman Empire. Alder (Alnus glutinosa), ash (Fraxinus excelsior and F. angustifolia), form a forest within the forest, by creating a specially shaded, fresh and rich natural space on the river banks. Elm (Ulmus glabra) prefers fresh and deep soils. Laurel (Laurus nobilis), holly (Ilex aquifolium) and hazel (Corylus avellana) occupy the lower part of the forest because they rarely reach the same height as other species. Birch (Betuda alba) colonizes the areas with poorer soil and on very steep slopes which helps to extend the forest further away from the river environment.

It should be noted that the Fragas do Eume are home to 28 species of ferns, 7 of them relict, of which 6 are classified as threatened and require the greatest protection. Both the geographical position and the orography of the Eume canyon made it possible for some ferns such as Culcita macrocarpa or Woodwardia radicans to remain up to present time.

Due to their humid and shady climate this is the ideal environment for amphibians and thirteen of the fifteen species present in Galicia make a home in the area. The Fire Salamander (Salamandra salamandra) and the subspecies Galician fire salamander (Salamandra salamandra gallaica) are very common as are the Iberian spiny toad (bufo spinosus) and the Iberian frog (Rana perezi)

Among the birds, those that have adapted to hunting in the forest, such as the goshawks and the long-eared owl stand out. Also, those that live in more open spaces such as the Eagle owl, peregrine falcon, black and red kite whilst on the river banks the dipper and kingfisher are present in good numbers.

Among the mammals look out for otter, stone marten, genet, roe deer, fox, deer and badger and in the highest and more remote areas there are Iberian wolf populations.

This 5.5 km route is linear. Round trip 11 km. It begins at the Cal Grande bridge, crossing the river and on the right hand side the footpath starts. 3 km from the first bridge there is a second suspension bridge where you can cross the river and return to the road that takes you to the Santa Cristina bridge or continue along the path to the Monastery. Keep in mind that to the Cal Grande bridge there are still 2.5 km by road from the Interpretation Center.

When the road is closed you have the following options:

If you have young kids then the path of Pena Fesa is ideal and runs through the mountains of A Marola and Pena Fesa (709 m). (The latter is one of the highest in the province of A Coruña). Most of the route, with fantastic views, is done on clear forest tracks and roads without traffic. The circular route is about 10 KM and takes 2 to 3 hours depending on how fast you walk.

Address: Lugar de Andarúbel. On the road from Ombre to Caaveiro at km 5.

This is the main information centre for the Fragas del Eume Natural Park and is a great resource with plenty of information panels and material about the fauna, flora and history of the area.

Bus service to the Caaveiro Monastery

In the Fragas do Eume Natural Park the use of private vehicles is restricted during Easter and the summer months. During these periods, visitors have a FREE bus service that connects the Interpretation Center of Caaveiro (Pontedeume) with the Monastery of Caaveiro (A Capela).