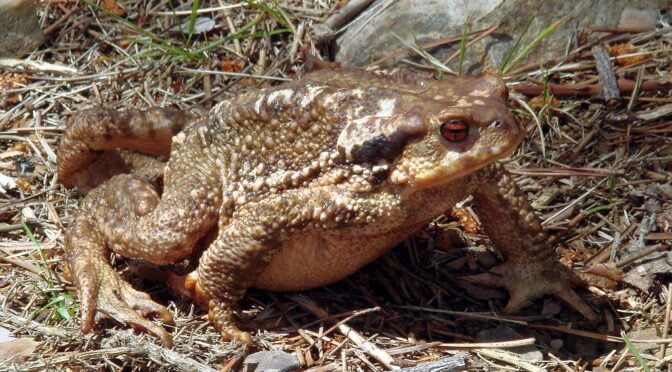 The Iberian spiny toad – Bufo spinosus – Sapo comun Ibérico is a member of a large genus of so-called “true toads” traditionally found worldwide, although some authorities have now separated the Old World species from the New.

A relatively large toad with a total maximum length of about 21cm, though males are rather smaller at 9-10cm and the average female is 15cm. The head is longer than wide, with a short rounded snout, and the area between the eyes is either flat or concave. The tympanum is barely visible, measuring about half the diameter of the eye. The fingers are short, the third being the longest, followed by the the first and then the second and fourth, these latter two being of equal length. There are two tubercles on the palms. The toes are relatively long and flattened.

In coloration the adult Iberian spiny toad is usually a brownish colour, but there is variation, especially in the southern part of its range. Colour variations include sand, brick-red, dark brown, grey and olive, as well as darker marks against the overall tone. The underside is whitish or grey, often with a marbled effect. The eye is copper or gold.

Bufo spinosus can be distinguished from the Natterjack toad – Bufo calamita (also present in Iberia) normally by the color of the eyes (normally red in B. spinosa and yellow in B. calamita) but also by the shape of the paratoid glands. (Look to the rear of the eyes). There may be a raised area on both sides of the head containing pore-like openings. These areas are known as the parotoid glands. Not only can their presence be a key to the species, but also their shape, since in some species the gland area is straight and in others bent inwards. In Bufo spinosus these are kidney-shaped, bending inwards somewhat in the middle, while in Bufo calamita they are straight, being further apart at the front than at the back. Bufo calamita normally also has a thin yellow stripe down the back which is lacking in Bufo spinosus. (Bufo calamita also goes by the scientific name of Epidalia calamita).

Like most European amphibians the Iberian spiny toad feeds on a variety of invertebrates. In Spain, beetles, ants, centipedes, millipedes, spiders, grasshoppers and related insects have been cited as part of its diet, as well as occasionally rodents (presumably mice, voles or similar small species), a reminder that these toads are relatively large. (However one observer states that they do not eat slugs as they probably don’t taste very nice? 🙂 ).

The toad is normally a nocturnal animal, although it can be found out and about in the open during wet weather or in the breeding season.

I once encountered a pair in amplexus by the stream in rainy weather during the daytime (picture further down the page), the pair making little or no attempt to move. (Amplexus = The copulatory embrace of frogs and toads, during which the male fertilizes the eggs that are released by the female).

Unlike frogs, toads rarely hop but prefer to walk.

They have two effective anti-predator devices: bufotoxin, a white milky substance which is secreted via the paratoid glands behind the eyes and which is extremely distasteful (and sometimes poisonous) to many predators, and the defensive pose in which they stand erect on their limbs and swell their bodies up to make themselves appear much bigger. This defence may be especially useful against the Grass Snake (Natrix natrix) since this species of snake does not seem to be affected by bufotoxin.

Bufo spinosus has a winter rest period from October-November until February-March. Most spend this period on land rather than in water.

During the breeding season, males arrive first at their home ponds/rivers and can remain for some weeks (3-28 nights) whereas the females may make just a short visit (3-6 nights) to find a mate and lay their eggs. Mating itself is a rough-and-tumble affair. Since males usually outnumber females by four or five times they must fight for mates and often end up clasping different species, fish or even inanimate objects, or else several home in on one female and form a breeding “ball”.

Males clasped by other males have a special “release call” to notify the offender of his mistake! Needless to say this level of competitive activity is stressful for all the participants, and toad mortality is quite high as a result. Females lay 3,000-8,000 eggs in two strings which they lay simultaneously over the course of up to several hours, depositing these on aquatic vegetation often in places where there is good sunlight.

The eggs develop within 2-3 weeks and the resultant tadpoles form large swarms. At metamorphosis they are 7-12mm long and more diurnal than the adults.

The breeding season varies according to range. In Portugal it lasts between November and April but lasts until June in the high mountains of the Sierra de Gredos.

Sexual maturity also varies with latitude, taking 3-7 years in northern Europe but in Iberia 3 years for males and 4 for females. Occasionally hybrids of Bufo spinosus and Bufo calamita can be found but they are thought to be sterile as no breeding of the hybrids has ever been observed.

Like all amphibians it is faced with the threats of habitat loss, chemical pollution and, more seriously, long-term climate change. As a species it has often been persecuted in the past by humans, partly because of a cultural association with its use by witches.

Despite the bufotoxin to deter casual predators, Bufo spinosus is also preyed on by various birds of prey (eagles, buzzards, kites, and owls) and the Grass Snake (Natrix natrix).

The toad fly Lucilia bufonivora also causes depredation by laying its eggs on the toad’s back. The ensuing larvae migrate to the nasal cavities of the toad and feed on the tissues in this area, causing the death of the host within 2-3 days.

One recent study estimates that adult populations have a complete turnover of 4-5 years, ie a loss/death rate of up to 25% of adults each year.

Iberian spiny toads are noted for their migrations towards their home ponds, a process which may begin in the autumn but which peaks in spring. At this time they are most vulnerable to road traffic, which in the past has taken a high toll.