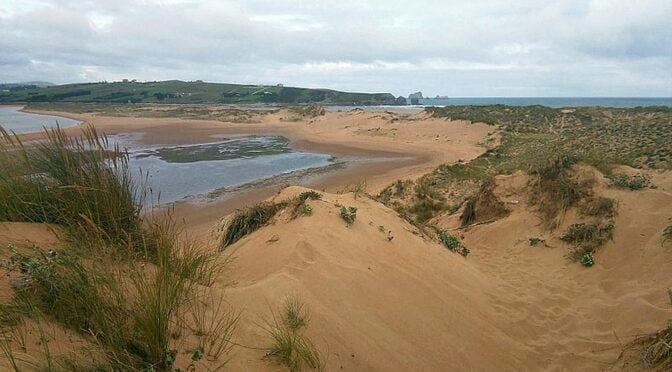 The Dunas de Liencres Natural Park is located at the mouth of the Pas river (Ría de Mogro) close to the town of of Liencres in the central area of ​​the Cantabrian coast. The area is made up of coves, two beaches, a large maritime pine plantation and one of the most important dune systems in Cantabria.

The two main beaches are Valdearenas (golden, fine sand and dunes) and Canallave, which is oriented to the Northwest and is very popular with surfers. Behind the beaches are the dunes, greatly influenced in their shape and form by the prevailing winds.

The pine forest of Liencres

Planting of this forest commenced in the 1950s and continued into the 70’s with mostly maritime pine (Pinus pinaster) and to a lesser extent stone pine (Pinus pinea) and Monterrey pine (Pinus radiata). This, of course, has had a fixing effect on the once movebale dunes and in turn has created a recently new habitat for local wildlife.

The beaches and dunes have scarce vegetation cover due to the special characteristics of the substrate (composed of loose sand, poor in nutrients and with a high salt content) and the climate (with strong winds). The vegetation presents special morphological and physiological features to adapt to a salty environment that does not retain water. These features are reduced and fleshy leaves and a greater development of the root system. Some of the species present are sea chard (Beta vulgaris), spurge (Euphorbia peplis), European searocket (Cakile maritime), prickly saltwort (Salsola kali) and knotgrass (Poligonum maritimum).

The estuary area at the mouth of the river Pas is a haven for both sedentary birdlife and passage migrants.

Piélagos is one of the most attractive areas of Cantabria for archaeological research and since the end of the 19th century, numerous sites have been discovered in the different towns.

If you want to visit the Altamira museum the information is on the official website.
http://www.culturaydeporte.gob.es/mnaltamira/en/visita/compra-entradas.html

The Cueva de Santián in Arce is of great interest and has Paleolithic paintings in the form of clubs or hands vertical and parallel. It was discovered by Alcalde del Río in 1905. Also in Arce there are other prehistoric caves such as Cobalejos and El Mato as well as a medieval necropolis around the church of San Julián in the village of Velo.

This natural park does not have a dedicated information centre but you can find out more in any of the local municipal tourist information offices and if you are staying close to the city of Santander then the main tourist office there will be able to give you more information.

There are various information boards along the routes through the forest and dunes detailing wildlife in the area.

The tourist information website Cantabria Infinita is also of some help
https://turismodecantabria.com/disfrutala/parques-naturales/2-parque-natural-dunas-de-liencres