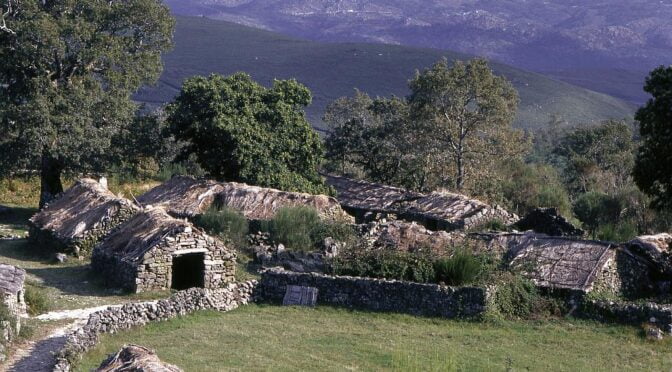 The Baixa Limia-Serra do Xures Natural Park and, on the Portuguese side of the border, the Peneda-Gerês National Park are now joined to create the Gerês-Xurés Transboundary Biosphere Reserve (RBTGX) With an area of ​​267,958 ha, of protected territory in two natural spaces divided between Spain and Portugal.

On the Spanish side the stunning scenery, the towns and small villages such as Casola are a delight to discover. The A Fecha waterfalls are well worth a visit and whilst you are out and about look out for the “Cachena” cows, a small breed with huge horns that are native to the area and which in recent years have been rescued from the danger of extinction by various breeding programmes.

The spa town of Lobios, with its thermal waters from the river Caldo holds Roman remains of the mansio Aquis Originis and Aquis Querquernnis is a Roman site made up of a camp and a mansio viaria located on the banks of the As Conchas reservoir in the village of Bande.

The Lindoso reservoir in the central area of ​​the park between Entrimo and Lobios , and the Salas river reservoir, in Muíños in the east of the park are well worth the visit and another smaller reservoir is the Olelas in the A Corga do Porto do Medio irrigation canal, a tributary of the Castro Laboreiro river located in Entrimo.

The Baixa Limia-Serra do Xures Natural Park is a transitional area between Euro-siberian flora (Atlantic) and that of the Mediterranean and combined with altitude factors holds a diverse array of plantlife with scrubland on the peaks and forests of oak and other species in the valleys along with important riverside woodlands. The flora of the park is characterized by a deciduous forest, with Pyrenean oak (Quercus pyrenaica), birch (Betula celtiberica) and Mediterranean elements such as strawberry tree and holly. There are several endemic plants such as the Portuguese laurel (Prunus lusitanica) which is a species that colonizes ravines and other areas of high humidity.

There is a healthy population of Iberian wolf in this area and their prey such as wild boar, red deer and Spanish Ibex.

Look out for the Galician pony or garrano, reintroduced into the region under a programme of recuperation of native species. There are also healthy populations of wildcat, the genet, otter, hare, rabbit and mink.

The emphasis in the tourist offices in this area is mainly about the roman history. There are some fascinating museums and information points in various towns and villages.

The main offices of the Interpretation Centre for the Baixa Limia-Serra do Xures Natural Park are easy to find, located in the spa town of Lobios

For Roman history a vist to the Archaeological Roman Complex is highly recommended.
Website: https://eng.querquennis.com/centro-de-interpretacion/

The official tourist website for the area is here: https://www.turismo.gal/que-visitar/espazos-naturais/parques-naturais/parque-natural-baixa-limia-serra-do-xures?langId=en_US