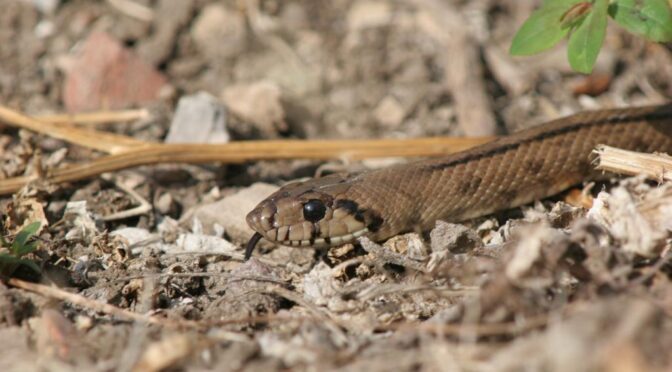 The Ladder Snake, A species of Zamensis (Elaphe Rhinchensis), a genus of snakes traditionally found in Eurasia, northern Africa and North America has a confusing taxonomy. Authorities have now split the genus into smaller groups.

The Ladder Snake is a medium-sized colubrid snake with a total maximum length of about 160cm, but averaging 120cm. The snout is pointed, and the rostral scale projects sharply backwards between the two internasal scales. In coloration the adult Ladder Snake is less variable than many other species, being a shade of brown from yellowish to dark brown (most pictures seem to show the latter) and with a pair of darker longitudinal stripes running down the length of the body from the neck to the tip of the tail.

There is usually also a dark stripe running backwards from the rear of the eye to the angle of the jaw and subtle, occasional darker markings on the sides. The underside is silver-grey to whitish, sometimes with a few dark spots. The eye is dark brown to black. The young are more striking in appearance, being lighter and somewhat brighter in colour, yellow to light brown, with black transverse bars down the back that often join up at outside edges and form the characteristic “ladder” pattern. They also have many more prominent dark scales along the sides and on the head and the yellowish or whitish belly is marked with black that sometimes covers it in its entirety. With age these prominent patterns fade and the overall colour becomes darker, until the simpler adult pattern is left.

Tours in Andalucia from Viator

Andalucia has a vast array of sites to visit and enjoy. Below are some of the options listed on the Viator website. (We recieve a small commission if you book a tour which doesn’t cost you more and helps us to keep Wildside Holidays up to date with the best information.)

It is found in areas with plenty of bush cover, including vineyards, hedges and overgrown dry-stone walls and is common in Mediterranean woodland. Sunny and stony habitats are especially preferred. Although known from heights of up to 2,200m, the Ladder Snake is more usually found at 700m or lower.

In many ways the prey of the Ladder Snake is typical of that of most rat snakes. A study of Alicante populations showed that nearly three quarters of its prey was mammalian (including mice, rabbits and shrews), about a quarter arthropods (spiders, insects, etc) and the remainder birds. For the latter item the Ladder Snake will seek out nests with chicks or eggs in trees or on walls, being a fair climber. Lizards are also eaten. The young tend to start out with small lizards, nestling rodents and arthropods such as grasshoppers.

The Ladder Snake is normally a diurnal creature (active by day), but during the hottest part of the year may be more active at night, even after midnight, while in the spring it may be active at dawn or dusk. In terms of behaviour it is more like a whipsnake than a ratsnake, being more aggressive and defensive than most Elaphe species. Warning signs are hissing and lunging forward with the mouth open and attempts to pick up a Ladder Snake may be met by sharp bites and also the emptying of the glands around the cloaca, which apparently is quite offensive! This behaviour may also explain the greater mobility of the snake compared to some of its relatives: movements of 100m per day are known, and the average home territory of an individual is 4,500m2. Adults may sometimes be found in buildings hunting for rodents, something to be borne in mind if you have an old outhouse, barn or similar building on your property. Paradoxically this is one way that the Ladder Snake may be seen as beneficial to people. It does not normally shelter in such places, however, but tends to use rodent burrows, piles of stones or hollow trees.

courtship takes place in Iberia in May-June, elsewhere possibly also in April, though not all females breed every year. Mating lasts for about an hour and 3-6 weeks later a clutch of 4-24 (usually no more than 15) eggs is laid. Incubation lasts 5-12 weeks. The colourful young are about 20cm long on hatching. Unusually, the mother may remain with them for a few days. Males mature sexually at a length of about 50cm, females at a length of 65cm (the latter taking about five years). One authority quotes records of 19 years longevity for both captive and wild individuals.

Populations in the south of Iberia are active all year round, but in cooler areas a winter rest of 4-5 months is usual. Hibernation is sometimes communal.

the rostral projects between the internasals. There is one preocular (sometimes divided) and 2-3 postoculars and 7-8 supralabials, of which the 4th and 5th or 5th and 6th touch the eye. The temporals are arranged in a 2 x 3 or 2 x 4 pattern. The dorsal scales are smooth and arranged in 25-31 (almost always however 27) rows at midbody. The ventral scales number 198-228 and there are 48-68 pairs of subcaudal scales.

Although reasonably common across its range, chemical pesticides in vineyards and other fruit-growing areas in the last century did cause damage to Ladder Snake populations. Among its predators are mustelid mammals (martens, ferrets etc), corvid birds (crows and relatives) and birds of prey.