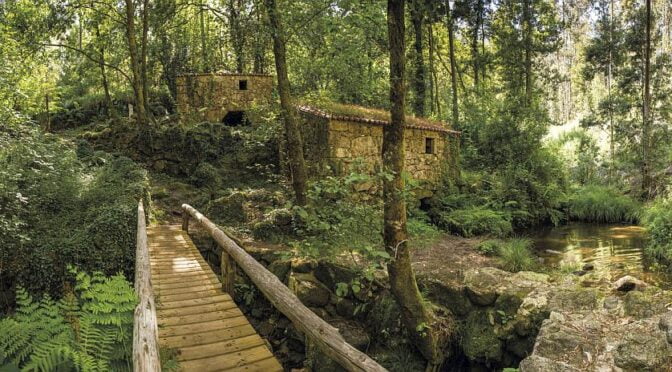 Located in the south of Pontevedra province the Monte Aloia Natural park (the first natural park in Galicia) is basically the summit of the Sierra de Galiñeiro mountain range.

There are prehistoric and Roman remains in the area and the fascinating local history is surrounded by legends such as this is place of the mythical mountain called Monte Medulio where the collective suicide of the Celtic tribes rather than falling into the hands of the Romans took place.

Forestry engineer Rafael Areses Vidal was born in Tui in 1878 who died in 1953. He was a man born before his time and transformed this landscape a hundred years ago with a reforestation project that included autochthonous vegetation as well as other exotic species, such as cypress, spruce and Lebanon cedar. He promoted the reforestation of Mount Aloia, creating in 1906 the Viveiro Forestal de Areas on Mount Seixos Albos (the first woodland plant nursery of its kind in Galicia) and In 1909 he started the first official plantations in Oia, Tui , A Guarda (on the mountain of Santa Trega), Baiona and Ponteareas. The supplies from his forest nurseries promoted the extension of the pine plantations in the whole of Galicia.

His conception of a mountain with a space of public enjoyment linked to forest exploitation and the consequent economic development, is an idea very close to the current concepts of tourism and environmental sustainability .

Find a hotel close to the Monte Aloia Natural Park

The trails here are very easy for walkers. The Muíños do Tripes trail is made up of walkways and wooden bridges alongside some interesting restored mills. The Rego da Pedra route can be started at the Forest House (information centre) itself or in the village of Frinxo and follows an old stone waterway built centuries ago to carry water to the crops. The botanic trail also starts for the interpretation centre and has plenty of information panels explaining the plant diversity andhelp with identifying the species in the area.

Other easy walks in the area are. (Ask in the information Centre)

Located in the municipality of El Rosal, the Folón and Picón mills (in Galician muíños do Folón e do Picón ) are a group of 60 cascading mills, documented as early as the 18th century. They are a characteristic legacy of the rich ethnographic heritage of the Bajo Miño region and as such have been declared Assets of Cultural Interest by the Government of Galicia.

For walking the route of the mills see wikiloc: https://www.wikiloc.com/hiking-trails/pr-g-94-ruta-dos-muinos-do-folon-e-o-picon-2961623

Directions: From Tui on the Gondomar road (PO-340) 1 km. detour to the right going up 5 Km. towards the top of Monte Aloia.

The interpretation centre for the Monte Aloia Natural Park is housed in an old forest house. The interesting design of the building is the work of the aforementioned forest engineer Rafael Areses who built it in 1921.

There are detailed information panels and a lot of information about the endemic and also introduced species of exotic plants.