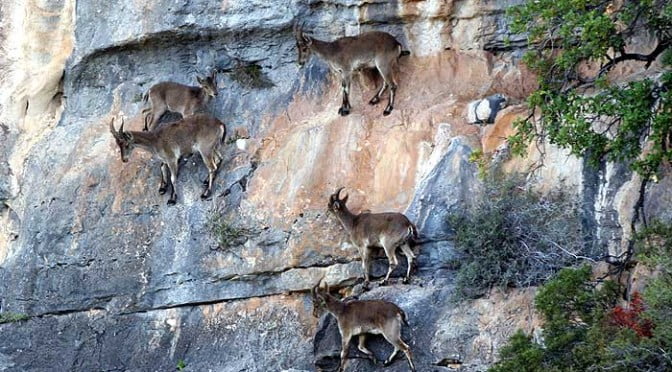 The Spanish Ibex (Capra pyrenaica hispanica) Cabra montés frequently found in herds across the Andalucian mountain ranges are wild mountain goats. There were until fairly recently, more subspecies spaced around the Iberian peninsular, but now only two exist.

These mammals which originate exclusively in the mountains of Iberia are known as Cabra montés in Spanish. They are generally shades of brown around the body with black markings on the chest, flanks and legs in the males, whereas the females are paler. The adult males can reach a weight of 80-100 kg and are approximately double the size of the females.

Colour and size variations can be noticed depending on their whereabouts within the peninsular. Both sexes have horns with a maximum length of 30cm in the females, while those of the males grow to far greater dimensions, reaching 80cm to 1 metre in older examples.

The horns curve back over their heads, the shape can be flattened or rounded and differs across the country, leading to confusion as to how many sub-species there are. Further research and DNA testing may be done in the future to clear up this matter.

In the Sierra de Grazalema Natural Park, Spanish ibex can be seen all year round.

The scientific names are as follows:

Spanish Ibex (Capra pyrenaica hispanica) Cabra montés are generally shy creatures and these native ungulates (mammals with divided hooves) live around oak or pine woodland on the edges of open rocky areas of altitude ranging between 200 to 3.300 metres. They favour higher reaches during the warmer months where they can show considerable skill on climbing onto seemingly impossible cliffs and descend for improved shelter during the winter. The position of herds on a mountain side will also be dictated by the available grazing and domestic stock or human interference.

During the rut males fight against each other for the alpha position and therefore the right to mate. Younger, weaker specimens will be filtered out by this process which involves rearing up and clashing horns repeatedly.

A typical age for taking over a group of females is 8 years, even though the males are sexually mature at the age of three. Having established one dominant male per herd the breeding begins in November and continues throughout December. This dominant male will watch over his herd defending them by standing in a prominent position and rebuffing other male advances.

The gestation period is 23-24 weeks with most birthing in mid-May, coinciding with rich spring plant growth yielding good milk production. Once at sexual maturity, 1.5years, the females will have one kid per year with twins being unusual. The females will wander off individually to search out a location with thick undergrowth for birthing. The females and young then collect into groups for higher security.

These wild caprine spend their days moving gradually across the mountain side browsing on oaks, primarily Holm’s oak (Quercus ilex) as well as grasses and flowering non-woody plants (forbs). Within the group some may be watching out for danger, others resting or grooming. If startled a warning snort will alert all and the herd will flee, nimbly crossing scree slopes and dangerous precipices if needs be, following a leader to safety.

The Spanish Ibex is by far the more numerous of the two remaining sub-species but that does not mean that its existence is not under threat. An illness ravaged the numbers in the natural park of Sierra de Cazorla, Segura y Las Villas in eastern Andalucia as recently as 1997. Around 95% of the population died from Sarcoptic mange (a skin disease caused by infection with the Sarcoptes scabiei mite). Presence of mites and their eggs generates a massive allergic response in the skin which developed in this instance at the beginning of the breeding season. It quickly spread, evolving to severe disease and terminating in death within 3 to 4 months.

This demonstrates just how vulnerable their status can be. Isolation in this situation is necessary to prevent further spread of the disease.

Ironically long term isolation of populations may cause a weakening of the bloodlines and therefore the ability to survive. Compounding this problem is human interference, one of the threats to these hansom mammals is trophy collecting. Rather than being hunted for their meat this is when the older and stronger herd leaders are shot simply for their heads. The impressive set of horns that they bear are considered collectable by some. This practise can seriously upset the balance of the herd as unworthy young males may sidestep the normal hierarchy “survival of the fittest” system.

Add to this agricultural expansion causing habitat reduction as well as closing of natural wild corridors between sierras, therefore preventing dispersal, each are reasons for declining numbers.

The current population of Spanish ibex throughout Andalucia is near to 30,000 individuals, more than half of the entire population of Iberia. The highest concentration is situated in the Sierra Nevada national park with close to 14,000.

The Gredos Ibex (Capra pyrenaica victoriae). The Gredos mountain chain which is found in western Spain, has recently estimated figures of 8ooo individuals with further much smaller populations such as those in nearby Batuecas. This sub-species is being introduced into the southern part of the Picos de Europa national park in León.

The Pyrenean Ibex died out as recently as January 2000 for various reasons, many mentioned above, despite being a protected species since 1918. In fact its preservation was the main reason for creating the first National Park in Spain, that of Ordesa in Aragón.

The Portuguese Ibex used to inhabit the mountains in the north of Portugal and also Galicia, Asturias and western Cantabria. This became extinct in 1892 mainly due to excessive hunting with the last recorded sightings being all females. They suffered year round human persecution despite hunting regulations, all further compounded by predation by wolves.

The last Pyrenean Ibex (Capra pyrenaica pyrenaica) became extinct in the year 2000. Researchers, aware that this female was the last of her species, had collected and stored skin cells taken from her during 1999, with the intention of cloning at a later date. January 2009 saw the culmination of the most recent trials, using the nuclear DNA of this extinct sub-species, combined with cells from a domestic goat 439 embryos were created and 57 implanted into surrogate domestic goats. Seven pregnancies resulted with just one embryo going to term and being born. Unfortunately it survived only a few moments due to physical defects in its lungs.

Leading the research was Dr Jose Folch, from the Centre of Food Technology and Research of Aragon, in Zaragoza, along with colleagues from the National Research Institute of Agriculture and Food in Madrid. Being a clone, only a female kid can be created as no DNA samples were taken from a male. This would presumably lead to use of a male from a different subspecies to breed with – if in the future a clone survives. This would then mean the watering down of a blood line brought back from extinction. Otherwise scientists must find a way to engineer the change of female embryo to male to provide her with a mate, but this would still leave the problem of not having a viable gene pool to create a healthy population. Perhaps what this has highlighted more is the need to take DNA samples from a variety of animals of a critically endangered species – if indeed cloning is a viable option. To this end a number of projects around the world are now attempting to store tissue and DNA from endangered species.

With this particular species what is most surprising is that a small herd was not kept in the confines of an enclosure where hunting could be ruled out, illness could be monitored / treated and the youngsters bred here could have been released into the wild. Thereby improving the chances for survival of the species rather than waiting until it was already too late.