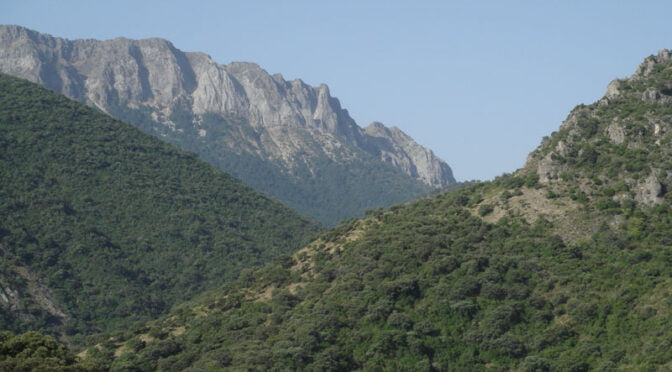 The Natural Park of the Sierra de Grazalema has also been declared a Biosphere Reserve, this is due to the diverse geography with high limestone mountains and deep gorges such as Garganta Verde, (Green Gorge) that is 400m deep and filled with lush vegetation. In addition, it offers a great diversity of species- animals and vegetation.

Many species are represented in the Botanical Garden of El Bosque, which is a good place to see the more rare flora of the area.

Numerous species of birds live in the park, the Griffon vulture being the most recognizable by its sheer size and tendency to fly in numbers.

For more in depth information about this area please have a look at the Grazalema Guide. This is our Tourist Information Portal for the Sierra de Grazalema, The town of Ronda and the Caminito del Rey. You can find out everything you need for a visit to this area of Andalucia (Where we live) 🙂

Tailored nature and cultural tours in the Sierra de Grazalema

Nature Plus – Grazalema is based in the picturesque white village of Grazalema in southwest Andalusia. The village is known for its white-washed houses, clay-tiled roofs, steep cobbled streets, traditional architecture, and deeply rooted cuisine.

Your local guide at Nature Plus – Grazalema is Sue Eatock. Originally from the UK, she has lived in Grazalema since 2005 and specializes in the wild plants and animals of the Sierra de Grazalema Natural Park’.

Find a hotel in the Sierra de Grazalema

The mountain range conserves an important mass of typically Mediterranean natural vegetation including evergreen oaks, cork oaks, strawberry tree, carob trees and wild olives. Pine woodlands have been planted for a crop and land stabilization in the past but have now naturalized. In the shade of the mountain

El Pinsapar is a magnificent forest of rare Pinsapo trees. There are three areas of this exclusive fir tree in the mountainous area of Ronda showing that it once covered more ground. Grazalema park has the largest area of them.

Mediterranean scrub including Lentisc, Cistus and Gorse cover the hillsides which in spring are also host to a huge variety of wildflowers, some of which only grow in the Ronda area, such as Linaria platycalyx. Those endemic to Grazalema are Papaver rupifragum, Phlomis margaritae, Echinospartum algibicum and Erodium recoderi. Ornithogalum reverchonii grows in the Sierra de Grazalema and North Africa.

The Griffon vulture has large resident breeding colonies here as does Red-billed chough. Eagle owls are resident but uncommon. Egyptian vulture, Booted eagle and Short-toed eagle arrive in spring to breed. There is a breeding colony of Lesser kestrels in the village of Zahara de la Sierra. Blue rock thrush, Rock thrush and Black wheatear can be seen on the higher ground with occasional Alpine accentor and Ring ouzel sightings in the winter. Warblers include sub-alpine, Dartford, Sardinian and Orphean.

Cabra montes or Spanish ibex is the most visible mammal. Red deer, Mongoose, Fox, Genet, Otter and Wildcat are much more elusive and can be hard to spot.

The number of people visiting El Pinsapar, as well as other enclaves of the park, are restricted. Permits should be sought at the Information Centre at El Bosque. (The park headquarters). From 1st July to 31st September (approximately) some areas can only be visited with a registered guide and organised group.

Click here to find out how to get a permit

At the reception you can find information about trails and get your permissions for restricted walks in the park area, attractions. There is also a shop with very different items (clothing, handicrafts, souvenirs, food, maps, guides, etc.).

The nearby botanical garden El Castillejo has examples of the most representative plant species in the reserve. Read about the Botanic garden in El Bosque here.

Most villages in the park also have their own municipal information centre or infomation point.