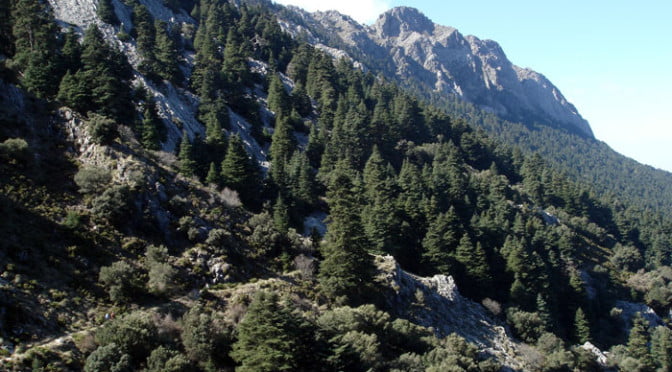 The Spanish Fir (Abies pinsapo) is a species of tree which survived the last glaciation. An elegant tree growing to a height of about 25m with a conical shape. Its growth is dense and a rich green, although there are occasional specimens of a blue colouration. The branches generally form rings around the trunk. The roots which are thick and long are sometimes very superficial. The trunk is straight and cylindrical but in some old individuals the shape can be irregular, twisted and contorted with more than one leader. (This is often due to beetle damage). The leaves are needle-shaped, rigid and somewhat sharp, these needles living up to 15 years, the maximum age among all gymnosperms.

These trees need high humidity and shady slopes or soils that retain a certain amount of water. Male and female cones are present on the same individual, but to avoid inbreeding the female cones are at the top of the tree (giving more chance of wind dispersal) and the male cones are lower down towards the middle.

The female cone is made up of many individual triangular pieces; a small membranous wing that helps in wind dispersal, and the attached seed. These cones disintegrate and release the seeds during the autumn. Pinsapos, as they are known in Spanish, are biologically fir trees and belong to the group of gymnosperms or plants without true flowers such as cedars, pines and cypresses.

If you would like to see pinsapo trees and learn a bit more about them, why not book a day out with Sue from Nature Plus – Grazalema. https://wildsideholidays.co.uk/nature-plus-grazalema/

Where are Spanish Fir trees found?

Their distribution is very restricted but the Spanish fir tree can be found in three forest masses which are:

Discovery of the Spanish fir tree

Clemente Rubio is currently attributed to the botanical discovery of the pinsapo as he took note of them in 1809 during a trip to the Serrania de Ronda. His writings were long believed lost but were rediscovered:

“We entered the pine forest .. in which there are few oaks and everything else pinsapos. They look from some distance like dark cypress with a conical shape …. “…

But the discovery for science is due to the pharmacists Haensel and Prolongo who showed sprigs of pinsapo to the botanist Edmond Boissier of Geneva who visited the city of Málaga in 1837.

Near Estepona he was able to see pinsapo trees with his own eyes on an autumn excursion with his friends Haensel and Prolongo and came to identify the tree through the cone as belonging to the genus Abies. There is nothing like the words of E. Boissier from his book “Voyaje Botanique dans le midi d’Espagne” to describe the emotion of the moment

… very near there, the guide showed us the first pinsapo from afar, with shouts of joy running full of emotion, but unfortunately the tree had no fruit, a second, third look gave me false hopes, I was lucky enough in the end and saw one whose upper branches were laden with upright cones. We hastened to scramble to pick them and there was no doubt about the kind of tree and its uniqueness. Abies was certainly close to our common fir …

Boissier reported the discovery in a magazine the next year giving the scientific name – Abies pinsapo.

Abies pinsapo are protected through environmental laws and regulations of protected natural areas of Andalucia, European directives and recently as a Biosphere Reserve. The pinsapo is listed as Endangered (EN) on the Red List of Threatened Vascular Flora of Andalusia.