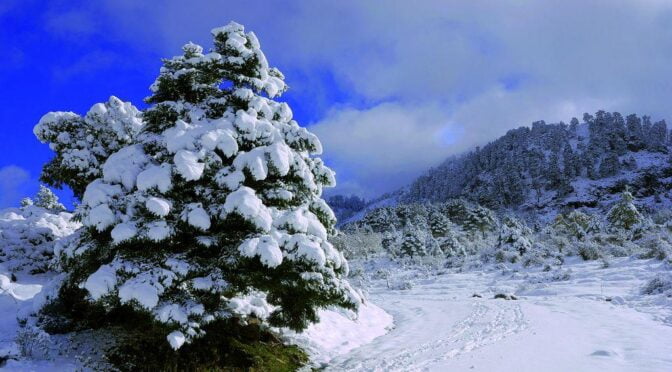 The Sierra de las Nieves Natural Park is going through a process to take NATIONAL park status. It will cover a huge area of approximately 300 square kilometres with its limts ranging from Marbella inland to include the villages of El Burgo, Istan, Monda, Parauta, Ronda, Tolox and across to the Sierra Bermeja close to Estepona.

The Sierra de las Nieves is a limestone massif clothed with evergreen oak trees and also home to the rare Abies Pinsapo or Spanish fir tree. The name “Nieves” refers to the winter snow which was once an important commodity in the area. Snow wells can still be seen on the exposed high areas. The snow would be collected by workers, deposited in the hand built, deep hollows. The snow was compacted, creating ice to be removed later in blocks and delivered the coast on mule or donkey trains to be sold.

The summit of Torrecilla is at 1919m altitude and although close to the Mediterranean coast receives higher precipitation due to an Atlantic influence. Not far from the highest point is also the “deepest” in the form of the G.E.S.M cavern “Los Hoyos del Pilar”. At 1101m deep it is the third deepest such abyss in the World. (Grupo de Exploraciones Subterráneas de Málaga = GESM)

Plants that are endemic to this small area of western Andalucia are Saxifraga bourgeana, Omphalodes commutata, Linaria platycalyx and Ononis reuteri. They occur in Sierra de las Nieves and neighbouring Sierra de Grazalema.

The Spanish ibex is the most emblematic of the sierra (Capra pyrenaica hispanica), there are roe deer (Capreolus capreolus) Wild boar, Wild cat and Stone martin and introduced Mouflon.

The visitor centre in Cortes de la Frontera acts as a gateway to the nature reserves of Los Alcornocales, Sierra de Grazalema and Sierra de las Nieves.The centre offers visitors the chance to learn more about the landscapes, nature, history and people so they can enjoy these nature areas to the full.

The Ronda Tourist Office provides tourist information for visitors to the city of Ronda, the nearby Serrania and the Genal Valley, the province of Malaga and the rest of Andalusia. Its qualified staff will help you discover a territory full of unusual attractions, brimming with history and tradition, with numerous leisure alternatives, events, a comprehensive range of restaurants, accommodation, cultural visits, museums, wine cellars, etc.