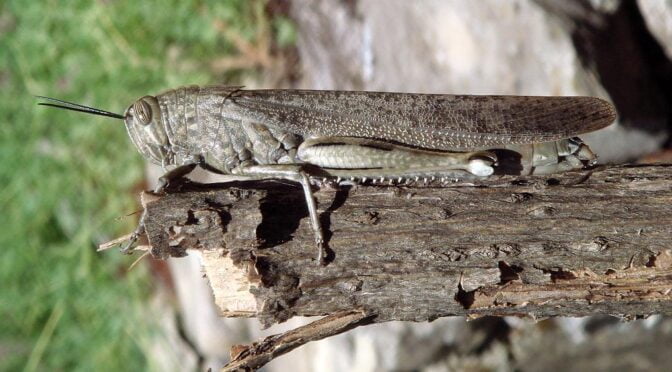 A common species in Spain, an adult female Egyptian grasshopper – Anacridium aegyptium – Langosta egipcia can reach a length of 6.5cm and the size alone can help in identification of this species. The male is much smaller, growing to around 3.5cm.

The colouration of the adults is generally grey, brown or olive coloured which gives them good camouflage against tree bark, with green examples occurring infrequently. The antennae are relatively short and robust.

This is a solitary species and not harmful to crops. Adults can mainly be encountered in August and September, but they are active throughout the year.

Both sexes can fly well and at rest their wings are folded along the body and overhang slightly. If disturbed, these grasshoppers can also use their strong back legs for jumping. They prefer warm dry areas of scrub land, maquis and orchards where they hide amongst foliage and branches, passing slowly to the under side of a branch in order to avoid detection.

The nymphs (young ones) can be found in a variety of colours including green, brown and pale orange, a selection of which may be found feeding communally. They can be told apart from other grasshoppers by the shape and size of the pronotum (the shield type shape behind the head, as seen in the image above) and on close inspection they have a vertical striped pattern in their eyes, visible at all growth stages. These grasshoppers undergo several moults during their first months. It is not until they go through their last moult to adulthood that the wings develop fully, until this point they are only just visible as small wing buds, enlarging slightly with each moult.

This species is active throughout the year and can be found from sea-level to 1,500m. Their diet consists of various leaves and singly they will cause little damage.

Eggs are laid in the spring just under the soil surface.

A pair of Egyptian grasshoppers mating. Note the size difference, the female being the larger of the two.

If you look closely at the image below you will see that there is more than one insect. Above the Egyptian grasshopper is a Praying Mantis (Mantis religiosa). The female Praying mantis is perhaps pregnant and this causes extra hunger which has encouraged her to attack the grasshopper even though it is larger and heavier than herself.