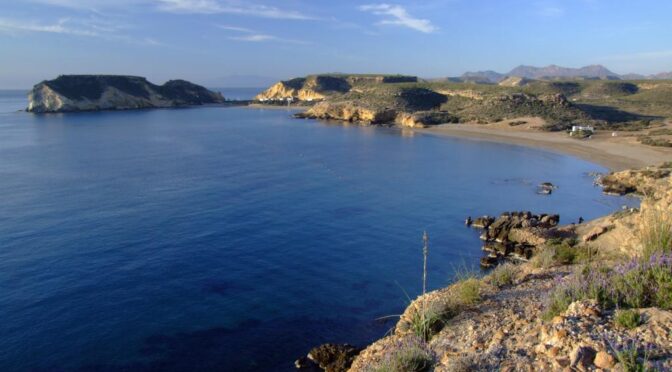 Protected landscapes (Paisajes protegidos) in Murcia are relatively small areas that for their ecological, habitat or other special reason such as the presence of specific types of wildlife are give some level of protection. Sometimes, but not always, thay fall within the limits of a natural or regional park area. This is normally due to the expansion of the natural park territory. Very often they are located in areas where human actions has either damaged in the past or continues to damage the ecosystem creating a need for an environmental protection plan.

The Gebas ravines are one of the most spectacular landscapes located inside the limits the Sierra Espuña Regional Park and distributed between the municipalities of Alhama de Murcia and Librilla. It is a desert-type space, like a lunar landscape or badlands, which is formed by gullies, canyons and ravines. The area covers almost 2000 hectares.

From Alhama de Murcia head toward the tiny village of Gebas and look out for the signs directing you to the “Mirador de Gebas“, This viewpoint offers fantastic views over the badlands.

This video is excellent and the music is too! 🙂

The Cuatro Calas protected landscape is located in the municipality of Águilas, next to the provincial border with Almería. It is a small coastal strip of just over 2oo hectares, in which small reliefs dominated by esparto grass are combined with ravines and sandy coves and cliffs. A natural space of great geological interest and high environmental value in which the absence of frost allows unique species in Europe to thrive such as African Wolfbane (Periploca angustifolia) and Jujube (Ziziphus lotus). The salt marsh at the mouth of a ravine is dominated by Arthrocnemum glaucum, Limonium sp., Salsola verticillata and Halocnemum strobilaceum.

Among its fauna, the spur-thighed tortoise (Testudo graeca) is present in good numbers. There are also wetland birds such as stork, steppe birds such as black wheatear and coastal birds such as little tern.

The salt marsh at the mouth of a ravine, dominated by Arthrocnemum glaucum, Limonium sp., Salsola verticillata, etc and Halocnemum strobilaceum.

The open spaces and islands of the Mar Menor are a series of protected areas located in the Mar Menor and belong to the Natura 2000 Network and are also a Site of Community Importance (SCI). They extend through the three coastal municipalities of Cartagena (1038.5 ha), San Javier (119.6 ha) and Los Alcázares (28 ha).

This area has suffered some pretty huge environmental issues over the years with uncontrolled building projects and human projects etc but now seems to be experiencing an welcome respite with the help of local ecologists and the EU.

As recently as July 2020 the “recovery and protection act of the Mar Menor” expanded the protected area with the inclusion of seven new wetlands in the environment of the lagoon. (Saladar de Los Urrutias, Mouth of the Rambla de la Carrasquilla, Saladar of Punta de Las Lomas, Punta del Pudrimel, Lagunas del Cabezo Beaza, Los Alcázares Lagoon, and the Lagoons of El Algar.

The Salinas y Arenales Regional Park close to San Pedro de Pinatar is a wetland with sandy areas located in the northern part of the Mar Menor.

Inside the protected area of around 1000 hectares,there is a port and some salt production is still in operation.

It is now included under the umbrella protection of the The open spaces and islands of the Mar Menor. (Espacios abiertos e islas del Mar Menor)

The Ajauque and Rambla Salada wetland is a protected landscape with an area of ​​1632 hectares and belongs to the municipalities of Fortuna, Molina de Segura, Santomera and Abanilla.

This wetland collects water from the nearby hills of El Charco and Serretilla through a complex drainage network during periods of rainfall that is normally quite scarce. However, this area is well known for some pretty torrential downpours at some times during the year which is why the Santomera reservoir was built in 1966 in order to collect and store water but also to control the damage done down stream by flooding.

In some areas, groundwater arises, forming permanent saline pools but there is a rapid extension of the reed beds that seems to be displacing the salt marshes. Some people are calling for the reed beds to be controlled whilst others say the area should be left alone.

The Sierra de las Moreras protected landscape can be found close to the municipality of Mazarrón. It is an imposing mountain range that rises up next to the Mediterranean sea and in which the Mediterranean landscape predominates with pine forests and ravines Traditional crops, cliffs and coves also present creating a habitat ideal for the the spur-thighed tortoise (Testudo graeca) and birds of prey such as the Bonelli’s Eagle and the Peregrine Falcon.

This area is included within the limits of the Calnegre y Cabo Cope Regional Park ZEPA special area for birdlife.

The Cabezo del Plomo archaeological site stands out for its cultural importance and is well worth a visit. It is a fortified town dating back to 3000 years BC, from the Copper Age, and has been declared an “Asset of Cultural Interest”.

All the islands are protected with the category of natural park status and,