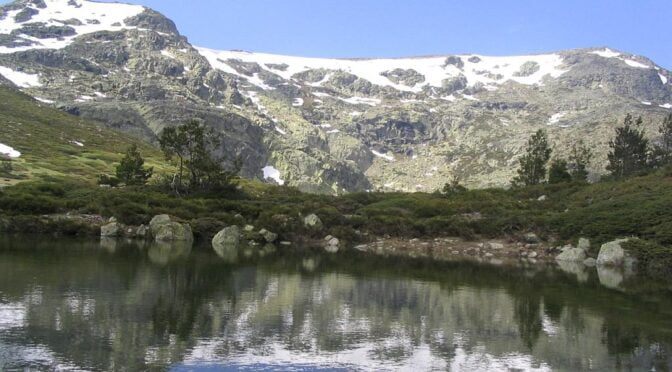 Some history behind the Peñalara Natural Park

During the 1920s there was a plan to create the Guadarrama National Park due to its important ecological value. The plan never started though due to changes in government and the Spanish Civil War. The area was, however, declared a Natural Site of National Interest in 1930, with the aim of preserving the landscape from external attacks. Even with that protection, in 1969 the ski resort of Valcotos was built which occupied much of Peñalara mountain and the construction of ski lifts, small buildings, slopes and various clearings caused serious damage to the flora, fauna and the terrain.

During the 1980s, a project was created to protect the eastern slope of the Peñalara peak including the lagoons and in 1990, the Community of Madrid declared the area as a natural park of the Cumbre, Circo and Lagunas de Peñalara. From 1998 to early 2000 the ski resort of Valcotos that occupied much of the southern part of the protected area was dismantled, the ski lifts were removed and the old tracks were planted with Scots pine.

Since the early 2000s, the government of the Community of Madrid and that of Castilla y León carried out a project to declare a large part of the Sierra as a National Park and after the declaration of the Sierra de Guadarrama National park, the Peñalara Natural Park, Cirque and Lakes Nature Reserve (Parque Natural de la Cumbre, Circo y Lagunas de Peñalara) now comes under the control of and is inside the limits of the Guadarrama National Park.

This beautiful high mountain habitat is situated just a short distance from the capital Madrid. The highest summit of the park is Pico Peñalara itself, at a height of 2,430 metres. The park is very popular for hiking, climbing and cross-country skiing during winter.

At the Peñalara Massif there are several wetlands with a great interest and ecological value, which origin is linked to the glacial activity of the last glaciations period. The Peñalara Lake (La Laguna Grande de Peñalara) extraordinary beautiful cirque. There are other smaller lakes such as the birds lake (La Laguna de los Pájaros) and the carnations lake (La Laguna de Claveles) plus numerous ponds and peat soils dotted around the massif.

The habitat of this high-mountain aquatic ecosystems richness has allowed the Peñalara Massif Wetlands inclusion as a Ramsar Site on the list of wetlands of international importance.

The vegetation of this natural park is composed of high mountain shrub formations, grasslands and Scots pine forests that only occur in the lower areas. In the highest parts, alpine meadows and rocky areas predominate. Some animal species that inhabit this place are black vulture, imperial eagle, small mammals and in the humid areas we can find rare species such as the Alpine newt, and threatened mammals such as Pyrenean desman and Cabrera vole (two rare endemic species from northern Spain and southern France.)

Find a hotel close to the Peñalara Natural Park

The Peñalara Visitors Center is located at the Cotos mountain pass (Puerto de Los Cotos). There are audio visual displays and exhibitions covering the geology, fauna and flora of the area.

The official website for the Guadarrama National Park is here: https://www.parquenacionalsierraguadarrama.es/en