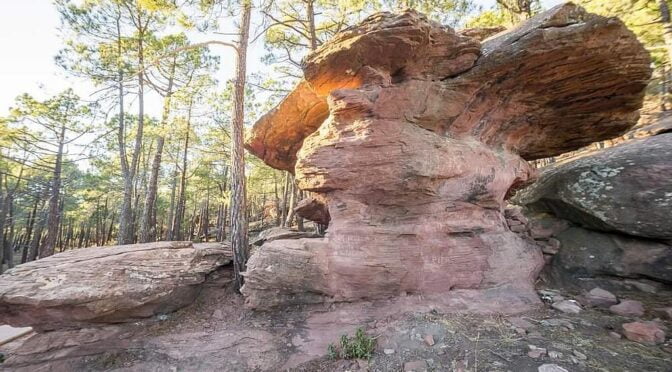 Created in 1995, the protected landscape of the Pinares de Rodeno is located in the Sierra de Albarracín region in the province of Teruel, Aragon. Local villages in the area are Albarracín, Bezas and Gea de Albarracín.The area covers around ​​6,829 hectares and the altitude ranges between 1,095 meters above sea level in the Tobías ravine and 1,602 meters in the Cruz de Montoyo.

The soil of the pine forest is formed on a substrate of red sandstone, called rodeno. Among the forms that the atmospheric agents have shaped. It is worth highlighting the gorges dug by the water courses, the taffoni (hemispherical holes in the rock wall) or the pilancones (large circular depressions in the rock surface).

There is also an area in which limestone rock is predominant with a softer relief and higher, flatter areas. Here there are other species of pines and holm oaks.

The main species of pine that inhabits the area is the rodeno pine (Pinus pinaster) which is characterized by having a medium height and a rough reddish bark. They have traditionally been used to obtain resin. The rodeno pine is accompanied by characteristic species such as juniper, rockrose, heather, lavender, rosemary and thyme . In addition you can find other species of trees of the genus Quercus (Carrasqueño oak, rebollo and sessile oak).

In ravines and more humid areas there are species such as poplar, willow, hazel, hawthorn and holly.

In the limestone areas, the rodeno pine gives way to the black pine and the scots pine.

The animal species found in the pine forests are typical of the Mediterranean forest such as wild boars, roe deer, red deer, fox, stone marten, hares. and squirrels.

Among the birds, the pine forests are a refuge for wren, crossbill, little owl, tawny owl, various hawk species and booted eagle. In the oak forests you will find birds like blue tit, blackbird, robin and buntings. On the cliffs and crags look out for golden eagle, peregrine falcon, kestrel and eagle owl.

Find a hotel in the Pinares de Rodeno

There are various caves among the pine forests with important examples of Levantine rock art, among which the Prado del Navazo, Doña Clotilde and the Cocinilla del Obispo stand out . The artwork represented consists of humans hunting or cooking and scenes of animals.

Located between Bezas and Albarracín, 30 km from Teruel, 14 km from Albarracín and 3 km from Bezas.

The exhibitions in this interpretation centre cover the rich natural history ​​of the protected landscape of the Pinares de Rodeno, especially the geological values ​​and traditional forest uses. Inside the centre we can find…

The centre of the park is the town of Albarracín and the surroundings of this medieval villa stand out as a remarkable geological, paleontological and archaeological heritage. Albarracín, surrounded by a vast pine forest holds one of the biggest amounts of post-Palaeolithic prehistoric art in South West Europe. There are over 20 sites to visit in the area containing painting representations in Albarracín, Bezas and Tormón. There are also two large areas with engravings in Pozondón and Ródenas.

Bronze Age remains can be found in places such as Cueva de la Artesa, in the mining fields Loma de la Tejería and Tajada Bajera.

Celtiberian culture remains have been found in the town of Griegos.

From Roman times, parts of an aqueduct remains which once brought water from the Guadaliviar river down to the town of Cella.

The Middle Ages are represented by the beautiful and well preserved castles of both Albarracín and Peracense. 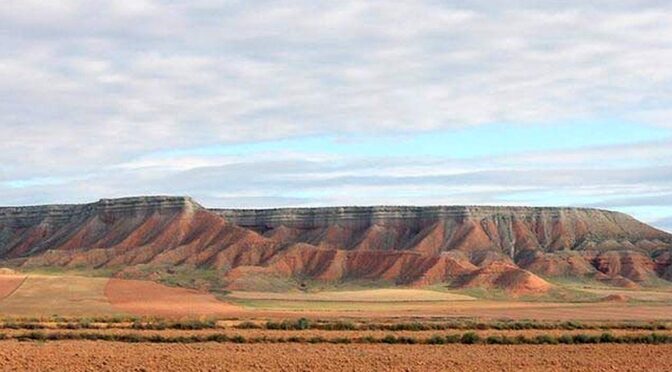 The Lomaza de Belchite Wildlife Refuge is located in the Campo de Belchite region in the southwest of the province of Zaragoza, Aragón. The refuge has an area of ​​961 hectares and was declared a protected natural area in1995.

This steppe territory is the result of a very ancient process of human deforestation and subsequent agricultural (mainly livestock) use.

The current wastelands and moorlands are fragile ecosystems and hold a habitat of specialized steppe flora and fauna.

The area has suffered an abandonment of traditional agricultural practices in recent years.

The flora is also adapted to the steppe environment with scarce arboreal and shrub vegetation resulting from the extreme weather conditions in the area.

There is very little rainfall, strong winds and sudden changes in temperature during both winter and summer.

Access is on the A-222 road, with a parking area, explanatory panels and a signposted itinerary that starts from this point.

There is a tourist office in the town of Belchite that should be able to help you with access to the area so it is reccommended to visit here first.

Interpretation Center of the steppes of the Ebro valley (Belchite)

This center is located in a superb building on the outskirts of Belchite next to the Ethnic Museum.

The center has a large room with the exhibition on display and another adjoining video room. In addition, it offers various interactive panels, with sounds and aromas of the steppe, models, audiovisual projections for groups which allows a first approach to these natural spaces before visiting the La Lomaza Wildlife Refuge and the El Planerón Ornithological Reserve.

The website for the town of Belchite is here.
https://belchite.es/ 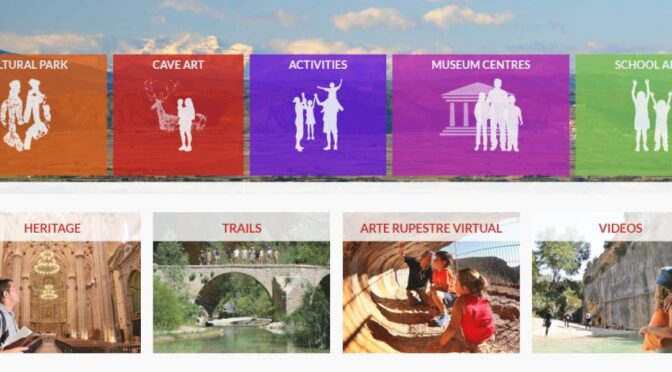 The River Vero Cultural Park is a unique space known for its cultural and natural value. This is evident in its nature, landscape, history, art, tradition and dynamism of its inhabitants. It was created in 2001 and includes the towns and villages of Bárcabo, Colungo, Alquézar, Adahuesca, Santa María de Dulcis, Pozán de Vero, Azara, Castillazuelo and Barbastro.

Discover the villages and stunning scenery of Aragón. This is perfect territory for a road trip staying one or two nights in selected villages and towns of the Aragonese Pyrenese.

The area is situated in the centre of the Huesca province (Aragon) and centred around the River Vero, a tributary of the Cinca River. From the north to the south, this river connects the pre-Pyrenean mountainous areas with the gentle reliefs and Mediterranean landscape of the Somontano, a geographical location in the Ebro depression.

Hotels in the area

The northern zone of the park is integrated into the Natural Protected Space of the Sierra de Guara Natural Park. (Read more here).

The River Vero Cultural Park is a living territory. Landscapes dotted with small villages with marked personalities, next to the mouth of the River Vero and the city of Barbastro. The centres are diverse in the sense of size, location, and volume of and materials used in the constructions. The bell towers have a unique profile and are inseparable from the urban landscape.

The northern villages are adapted to the topography and were strategically positioned at a defensive level during the Middle Ages. This resulted in compact urban centres, with an organic growth outwards from the church, or the main fortress, if there was one.

In the central and southern areas the geographical conditions are more favourable, which permits the streets to be wider and straighter, with a less compact layout and more orderly growth.

More information on the official website of the The River Vero Cultural Park https://parqueculturalriovero.com/en/ 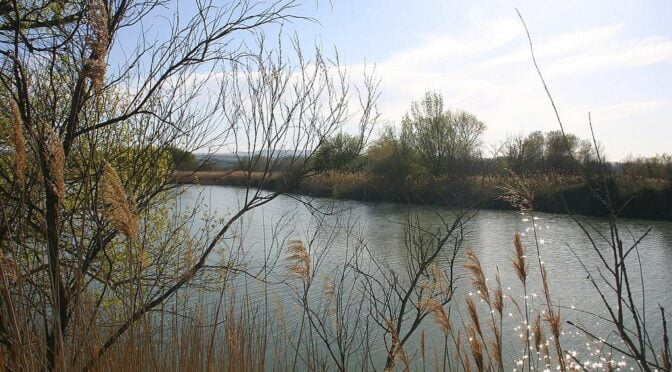 A bit of a mouthful even by Spanish standards but the Reserva Natural de los Galachos de la Alfranca de Pastriz, La Cartuja y El Burgo de Ebro is well worth a visit if you are in the area.

The nature reserve is located in the middle of the Ebro valley in the province of Zaragoza.

A Galacho (Ox-bow lake in English – Resaca in the US and Billabong in Australia) forms when a river creates a meander, due to the river’s eroding bank. After a long period of time, the meander becomes very curved, and eventually the neck of the meander becomes narrower and the river cuts through the neck, cutting off the meander and forming an oxbow lake.

Since the 1960s, these areas of still water (Galachos) have been declining due to extraction for human resources such as irrigation and drinking water.

The typical vegetation of this ecosystem is mostly reed being the typical plant of the humid environment in addition to the presence of aquatic fauna and flora. Also providing an excellent habitat are poplars, tamarisk and willow.

The irrigation of the southern farmland of Zaragoza (Aragón), the artificial ponds of Saica and other artificially formed bodies of water, such as the Canal Imperial de Aragón and its pond create a large protected area for migratory groups of more than 1500 specimens of birds such as kites, crows, lapwing, rooks, seagulls, storks, vultures and starlings.

This centre has guided visits to the Galacho de la Alfranca

There are also excellent audiovisual projections, exhibitions and models. Indepth iformation can be found about the riparian ecosystems, fauna and vegetation of the reserve river forests and the fluvial dynamics of the river Ebro.