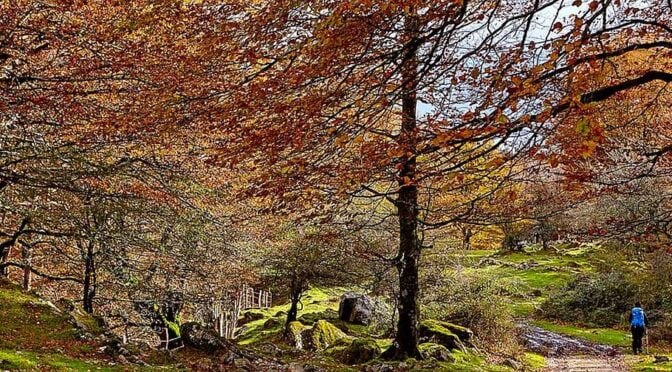 Navarra is a separate region from neighbouring Pais Vasco but a dialect of Euskera, the Basque language, is still spoken.

In medieval times Navarra was an independent kingdom controlling the Basque country throughout the Pyrenees and also part of Christian Spain.

The Roncesvalles mountain pass in the Pyrenees connects France and Spain and through the ages has been used by Romans, shepherds and smugglers.

Now it is better known as the starting point in Spain for pilgrims on their way to Santiago de Compostela in Galicia (The Way of Saint James).

Find a hotel in Navarra

The exceptional Pyrenees mountains form the northern border (Pirineo Atlántico) and contrast with the fertile plains of the Ebro valley in the south. The Navarra Pyrenees highest peak is “Mesa de los tres Reyes” at 2444metre.

The climate of the northern area is influenced by the Atlantic and the Ebro valley more by the Mediterranean.

Navarra offers an extremely varied landscape. As you travel from north to south you can experience high peaks, large forests (including the oldest and largest beech forest in Europe), canyons that are home to many raptors such as Hoces de Lumbier and small lagoons in the Ebro valley. These wetlands provide ideal reserves for Purple heron, Great bittern and Night heron amongst many others.