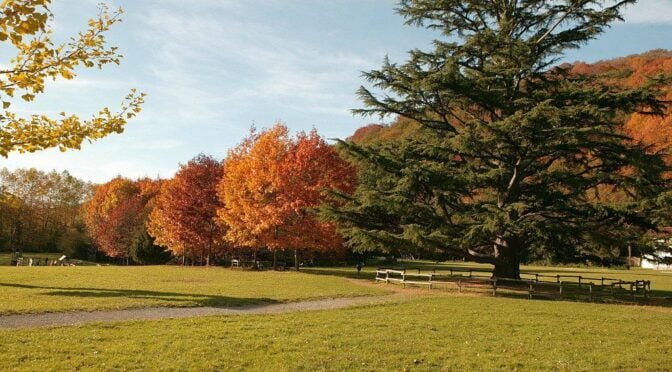 The Señorío de Bértiz Natural Park is located in the municipality of Bertizarana 49 kilometres north of Pamplona along the banks of the river Bidasoa. (Access is via the village of Oronoz in the Baztan valley or Oiergi in the Bertizarana valley).

The protected area was once privately owned and belonged to the sitting Lord of Bertiz from the 1600’s until 1898, when it was acquired by Pedro Ciga Mayo who oversaw the planting and reforesting schemes that can be seen today. He donated it to the local community of Navarre in 1949, with the condition that it was “maintained in its current condition and used exclusively for recreational, educational and scientific purposes”.

To the south, in the lower zone of the Bidassoa river and close to the town of Oronoz-Mugaire, are the palace and gardens standing on 3.4 hectares which include an abundant botanical collection, with species represented from all over the world.

The northern area of the Señorío de Bértiz Natural Park is a succession of valleys and mountains covered with native atlantic forest of beech and oak.

There are several forest tracks and footpaths that lead to the top of Mount Aizkolegi where there is a castle house, now abandoned, from which you can enjoy magnificent views of the park.

The tranquility that this Natural Park enjoys allows the observation of some of the common mammals in the area such as wild boar, fox, badger, stone marten, hedgehog, roe deer. Others also present although with less density are otter, polecat, genet and wild cat. The Pyrenean desman, also present, is a small insectivorous mammal endemic to the Pyrenees that requires fresh and clean waters to live.

There are some excellent walking trails here of varying distance and all are well signposted and color coded.

AIZKOLEGI (green path)
The summit of Aizkolegi (830 m.) is the highest point and has a magnificent viewpoint over Bertiz and the surrounding valleys. The last owners built a summer palace here of which the ruins are preserved.
Length: Almost 11km. along forest track.
Total route: 22km.
Average time: 6 to 7 hours

IRRETARAZU (blue path)
The Irretarazu path starts from the main path of the park at the height of Carbonera. Along the route you can see remains of some of the traditional uses of the forest: charcoal, grazing, small buildings to store chestnuts, water catchments … The path ends at the Aizkolegi track.
Length: 7km. along paths and tracks.
Total distance: 11 km.
Average time: 3.5 to 4 hours.

SUSPIRO (red path)
This path is a variant of the Irretarazu path but slightly shorter.
Length: 5 km. along paths and tracks.
Total route: 9 km.
Average time: 2.5 to 3 hours.

AIZKOLEGI-PLAZAZELAI (yellow path)
This path is known by the name of “straw path” as it was built to allow the passage of the straw carts bound for neighboring farmhouses.
Length: 2.5km. along the steep forest track and path.
Average time: less than 1 hour.

PLAZAZELAI (purple path)
The Plazazelai gate (540m.) Marks the limit of Señorío de Bertiz with the Baztan valley.
Length: 8km. along the forest track.
Total route: 16km.
Average time: 5 hours
This is the only route authorized for cyclists.

ERREPARATZEA(orange path)
This small walkway runs along the banks of the Bidasoa river between the main access of the park and the bridge and the Reparacea palace. This road was the main access to Bertiz until the Oronoz-Mugairi road was built.
Length: 700 m. down the old road.
Total route: 1.5 km.
Average time: Half an hour.

The wildlife interpretation centre is located in the Tenientetxea farmhouse and is filled with interpretation panels covering all aspects of the natural history, fauna, flora and geology of the area plus information on walking routes etc.

The Señorío de Bértiz botanical garden is home to about 120 species from all over the world since thanks to its mild microclimate it supports plants from temperate and subtropical climates, highlighting among others, Camellias, Palms , Cypress, Araucaria, Ginkgo, Liquidambar, different species of bamboo and water lilies around a small lake.

In the 18th century Palace, temporary exhibitions are housed on its ground floor.

The official website for the Señorío de Bértiz Natural Park is here: http://www.parquedebertiz.es/informacion-es/el-parque-natural.html