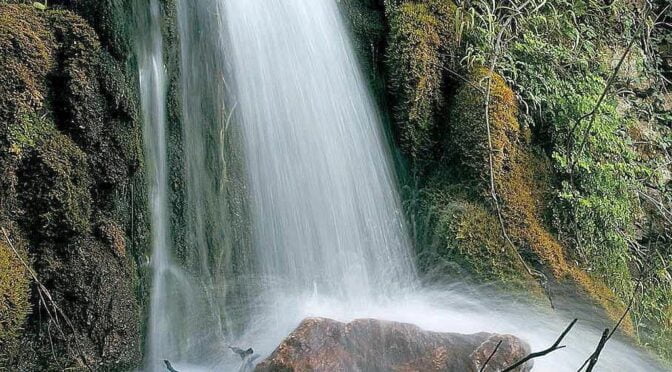 Here the Purón river with its wide valley flows through an isolated and sparcely populated area resulting in a magnificent natural conservation of wildlife.

Below the abandoned town of Ribera, the river passes through an impressive gorge before joining the Ebro river. An important Roman road once passed through the gorge which was a communication route between Frías (Burgos) and the port of Orduña. Also in the area there are remains of megalithic monuments such as the burial mound of San Lorenzo, the monolith of Monte Lerón and various hermitages from different periods.

The area enjoys a climate in transition between the Atlantic and Mediterranean environments, with hot, dry summers and winters in which there are heavy snowfalls. These conditions result in a wide biodiversity, a great wealth of both flora and fauna due to the existence of species that are typical of both these environments.

Find a hotel close to the Valderejo Natural Park

The vegetation is very well preserved, standing out among the tree species are scots pine, beech, holm oak, gall oak and other riverside trees such as willow and hazelnut .

Amongst the mammal populations to look out for there is hare (Lepus capensis), wild boar (Sus scrofa),roe deer (Capreolus capreolus), and the Iberian wolf (Canis lupus signatus) is also present.

Short video showing the scenery in the Valderejo Natural Park

The walk to the summit of Valderejo (4.8 km)

Recuenco at 1,239 metres is the highest peak in the Valderejo Natural Park. It rises up in the far west of Valdegovía and looks out over the Losa Valley. Other peaks are Arrayuelas (1,128 m) and Vallegrull (1,226 m), but in contrast with these Recuenco shows smooth curves covered in vegetation, making it accessible from many points.

Those wishing to hike to the top generally start out from either the abandoned village of La Hoz (925 m), part of the protected park area, or from the pass known as La Horca de Lerón (902 m), which separates Valdegovía from the Losa Valley. A third option starts from San Pantaleón de Losa. (http://www.valdegovia.com/en/valderejo-rutas-cima.asp)

The Reserve Centre (Casa del Parque or Parketxea) was built over the old Lalastra village school, abandoned since the 1970’s. Inside you will find interpretative panels and information about the fauna, flora, history and culture of the area along with reccomended routes for walking and driving.

A series of buildings and equipment that once formed a vital part of the inhabitants’ daily life has been restored and most are located around Lalastra Each is accompanied by an explanatory panel explaining the use to which they were once put.