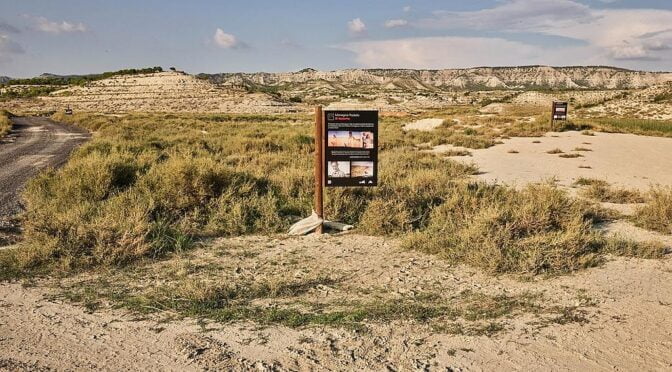 Despite its apparent barren landscape this natural area (The future Estepa de los Monegros National Park) is of ​​high ecological value, home to a rich biodiversity and represents one of the best semi-desert areas in all of Europe.

The Sierra de Alcubierre mountain chain crosses the comarca from Northwest to Southeast. Its maximum elevation is 822 meters, at the mountain called Oscuro. The climate is semiarid with scarce rainfall and high temperatures in the autumn. The area has numerous saltwater and freshwater lakes, including the lake of Sariñena and the lake of Gallocanta.

The proposed area for the future Estepa de los Monegros National Park covers the Aragonese regions of Los Monegros , the Ribera Baja del Ebro and the Central Region, in the provinces of Zaragoza and Huesca, and has an area of ​​28,869 hectares distributed between the municipalities of Alfajarín and Villafranca de Ebro (Central Region), Pina de Ebro (Region of the Ribera Baja del Ebro), Monegrillo, Farlete and Perdiguera (Region of Los Monegros) in Zaragoza and Alcubierre, Lanaja (Los Monegros region) in Huesca.

The natural spaces that make up the Network of National Parks in Spain form a varied mosaic of ecosystems such as marshlands, lava fields, snowy peaks, marine reserves, forests, deserts and river canyons so it is important that the landscape and habitat of Los Monegros be added to this listof protected areas.

The advance of macro-farms and mega-projects of renewable energy add to the threats to this valuable natural space as was the plan some years ago to build a huge Las Vegas casino complex (Gran Scala) so the conservation organization SEO / BirdLife has sent to the Ministry for the Ecological Transition and the Demographic Challenge (MITECO) and the Government of Aragón a proposal to declare the Estepa de Los Monegros National Park.

If declared this would be the first protected natural space designated as a National Park with characteristics of a steppe ecosystem, both in Spain and in Europe, which would place Aragón as a benchmark for observation and study of these valuable ecosystems . The designated territory represents a dozen habitats of community interest, three of which are a priority at European level, and it is home to valuable biodiversity, among which several species of flora and fauna in danger of extinction are present.