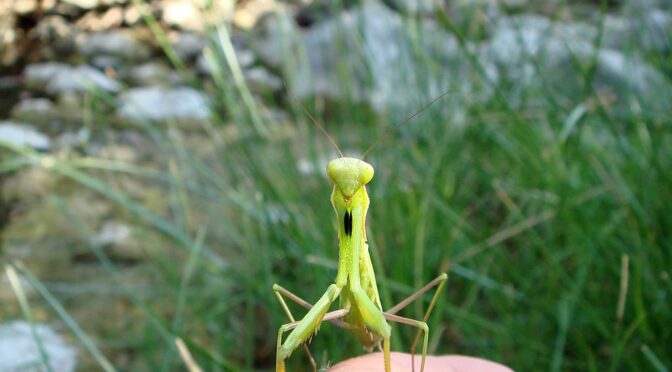 Mantises, in general, are often mistakenly referred to as “Praying Mantis” but this is the English name for just one species, Praying Mantis (Mantis religiosa)- Insecto de Santa Teresa, the most common species in Europe.

These solitary insects can grow to a length of around 8cm males / 12cm females and are usually either green or light brown in colour. When they hatch out from the ootheca or egg case during spring and early summer they are only about 4mm in length, wingless, very agile and able to feed on small flies, leafhoppers and aphids.

After hatching, it is necessary to disperse quickly in order to prevent cannibalism by the siblings (as many as 300). They will undergo six moults over the course of the summer before reaching full adult and reproductive age in the early autumn.

Once they have reached adult size the wings will develop, on this species they completely cover the body and this is one way of distinguishing them from other species. Another feature is an eye spot on the inner side of the upper foreleg. These can be used to startle and confuse would-be predators as the mantis raises its forelegs holding them outwards to display these markings at the same time as lifting and flapping its wings.

The males are slender whereas the females have a more bulky appearance. Males will fly to discover a mate and a female may copulate with more than one male.

Soon after copulation the female searches out a site to lay her eggs. This may be on plant material, on a rock or on a building, she may lay two to five oothecas (egg-cases) with between 40 to 300 eggs in each. The male and female will die during the winter but the ootheca forms a hardened shell and will protect the several hundred eggs within until they are ready to hatch as the temperatures rise the following spring.

They wait patiently amongst plants with their front legs folded as if in “prayer”, then grab insects from the air with amazing speed. Generally the prey cannot escape as it is impaled on the foreleg spikes, but to be sure they tend to eat the head and neck first thus immobilising it. All parts of the bumble bee in the photo were eaten, including the wings, legs and fur. If any part is dropped then it is abandoned.

Mantises have highly adapted sensory ability, unusual within the insect world are their large compound eyes with binocular vision and ability to rotate their heads to see around nearly 300º. They have antennae which are used for smell and research has shown that they can detect echolocation of bats via a single ear and spiral out of the air in order to avoid being eaten.

Praying Mantis were accidentally introduced into North America in 1899 on nursery stock plants from southern Europe, their predatory skills were soon appreciated. They have since naturalised and are actively encouraged as pest control for agriculture. However, the mantis doesn’t know the difference so as well as eating insects that could damage crops they will also take beneficial ones such as honey bees. 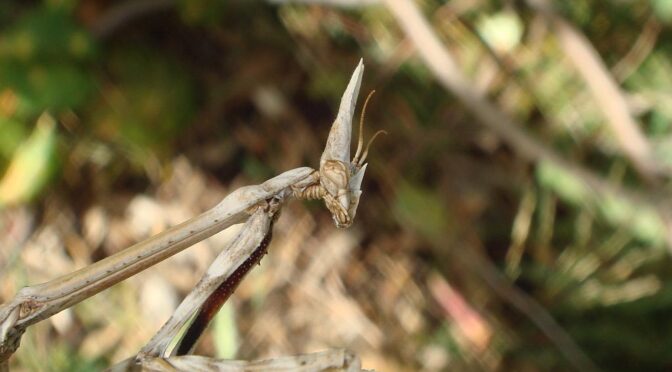 Mantis in Iberia are carnivorous insects that rest on plants while they await their prey. The size, colour and shape can vary greatly between species through their virtually world wide distribution, which consists of more than 1800 species.

Within Iberia there are 15 species on the mainland with another on the Canary Islands.

The green, brown or grey body colouring that we see in these European species allows them to hide undetected amongst shrubs or grasses.

During their early growth stages they shed their outgrown exoskeleton and at this time can take on the colour of the surrounding vegetation i.e. brown for dried grasses or green for lush plants. They will only feed on active prey and have well developed senses to locate a promising meal.

An ability to turn their heads to view 300º is unusual amongst insects and large, compound eyes set on a triangular head is a common trait amongst the differing types.

Alert to both food and danger they mostly rely on their mimicry to give them cover.

In their preferred method of hunting they simply sit in a discreet position, blending with their surroundings. The common name “Praying” mantis is in reference to its poise whilst waiting patiently for food to come within reach.

The two front legs are folded as if in prayer but are armed with many sharp spikes and when an insect passes close by they can snatch it from the air, grasping it as they draw their forelegs back in a pincer movement, thereby preventing escape.

Sitting close to flowers will provide a steady stream of pollinating insects to choose from, as they hunt by day. The remaining two pairs of legs are used to climb, cling onto plant material and jump.

Many, but not all, mantids have wings and are good flyers. The outer set of wings are coloured to match the body, are harder and act as protection for the second set.

One species in particular has another use for their wings. The Iris oratoria mantis has coloured eye spots on its wings and will stand tall, flapping its wings if it feels threatened – aiming to startle a predator. The more common and widespread Mantis religiosa has eye spots on the inside of its forelimbs which it can show to ward off predators. Males are more likely to fly while in search of a mate, some may fly to lights at night.

During copulation the male places a sperm sac inside the female. On some occasions the female may eat the head of the male during copulation if food is scarce. By doing this not only does she get necessary nourishment before egg laying but she also removes the competition for food in the vicinity. As the eggs pass through her reproductive system, the stored sperm fertilizes them. She chooses a situation to place the eggs such as a branch, stem, rock or building and exudes a substance which develops into a foam and soon hardens. (Each species produces a slightly different shaped and coloured egg case). Inside this protective foam are individual cells, as few as thirty or up to three hundred depending on type. This ootheca affords protection to the developing nymphs. A single female may produce several oothecas.

Generally the mating and egg laying takes place at the end of summer with the eggs remaining in the ootheca over winter. When the temperatures are suitable the nymphs may all hatch together or in batches. They are voracious eaters and may cannibalise their siblings if there is not adequate food available. They will soon make the first of up to 7 moults before reaching the adult stage. They emerge as miniature mantis of around 4mm but have no wings at this point, so they rely on running and jumping away from danger.

In most cases, from hatching to adulthood, mating and consequent egg laying and death occurs between spring and autumn of the same year. (It is rare for an adult mantis to survive through the winter). There are however some species that pass through the winter both as oothecas and nymphs such as the Iberian endemic Apteromantis aptera which is a protected species. This means that adults and nymphs may be seen together in both spring and autumn.

Mantis species may have a voracious appetite but sometimes they are preyed upon themselves. The left hand image shows a colourful Bee-eater (Merops apiaster) which is a summer visitor to Iberia, about to take a preying mantis into the nest tunnel to feed to its young. The image to the right has been enlarged to show a tiny parasitic wasp which uses the long ovipositor at the rear to embed its eggs inside the mantis ootheca where the larva will feed off its contents, in this case the mantis eggs involved are Apteromantis aptera.

These two images are both of common Praying Mantis (Mantis religiosa) oothecae. The left hand image shows pieces hanging that protect each tiny mantis inside the egg case but are shed as they exit and disperse. This was a mass emergence as there is a lot of debris, it is very fine and so will soon break away. The nymphs will always exit via the central line where there are overlaid flaps like tiles, the side walls are too solid for them to break.