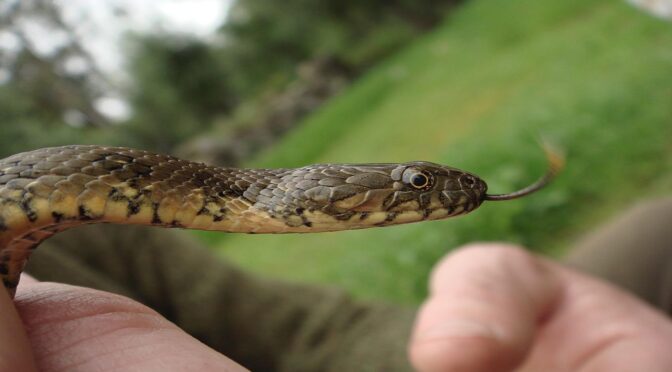 Non-Venomous and although the name suggest a viper, the viperine snake is not poisionous and like most snakes, avoids human contact when it can.

This is a finely built snake that is most often seen in or near water. Usually they do not exceed 65-70cm in overall length, but occasionally can reach 90-100 cm with the female reaching the greater lengths.

The colours are generally yellow with a dark brown, sometimes checker board pattern, along the back and marks almost forming eye spots along the sides, regional variations occur. One variation is an overall dark colour with two pale stripes running parallel its full length.

The large, round pupils are set high on its head as it hunts mostly in the water, swimming slowly along the banks edge or through weeds with an ability to stay under water for up to 15 minutes. Their diet consists mostly of small fish, tadpoles and frogs. They can be found throughout Iberia and can survive to an altitude of 1,800m although are normally found below 1000m. The type of water body can vary from a well, a natural pool, a river to water deposits for irrigation. They can also tolerate salty water at river outlets.

Primarily diurnal during the spring and autumn months they can also be active on summer nights. From November to March (this can vary with temperatures) they will hibernate away from the waters edge hiding under a rock or log. On occasions they can be seen sunbathing on warmer days during this time of hibernation.

Breeding in the spring results in between 4 to 24 eggs (on average 6) being placed in June or July near the water in tree roots or under rocks. The eggs are white and measure around 30mm by 16mm. The incubation time is between 6 weeks and 3 months.