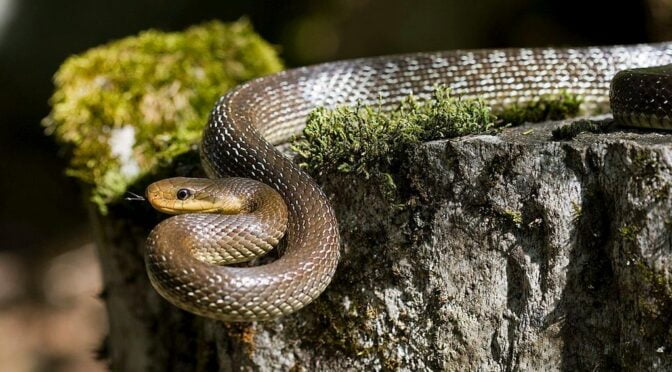 The Aesculapian Snake is a species of Elaphe, a genus of snakes traditionally found in Eurasia, northern Africa and North America, although some authorities have now split the genus into smaller groups. Some also consider Elaphe longissima to be a species of Zamenis instead, but the traditional species name looks set to be around for a while yet.

A number of former subspecies of this snake are now considered full species in their own right but none of these occur in Spain.

The Aesculapian Snake was first described by Josephus Nicolaus Laurenti in 1768 as Natrix longissima, later it was also known as Coluber longissimus and for the most part of its history as Elaphe longissima. The current scientific name of the species based on revisions of the large genus Elaphe is Zamenis longissimus. Zamenis is from Greek word for angry, irritable or fierce. Longissimus comes from Latin and means “longest”; the snake is one of the longest over its range.

The common name of this snake arises from its association with the Greco-Roman god of healing, Aesculapius (Greek Asclepius), around whose temples in the ancient world the species was encouraged.

The traditional sign of medicine even today is two snakes entwined around a staff.

(Aesculapian snakes are among those carried in procession in Italy in honour of Saint Dominic of Sora during the Festival of Saint Dominic Abbot (also known as the “Festival of the Serpari”) in the village of Cocullo, which takes place on the first Thursday of May. Nowadays after the festival the snakes are returned to their place of capture and released).

This is a medium-sized colubrid snake with a total maximum length of about 200cm but averaging 140-160cm. Males are the larger of the sexes. The snout is somewhat flattened and the rostral scale does not protrude backwards between the two internasal scales. In coloration the adult Aesculapian Snake is less variable than many other species, being a light brown with small white dots. Although coloration is said to be more variable in general for this snake, one Spanish source describes only the light brown and fairly pattern-free coloration: however, darker or black (melanistic) individuals may occur, as do albino specimens. Some authorities also cite very subtle, slightly darker longitudinal lines that are harder to distinguish than those on the Ladder Snake. The belly is yellowish or whitish. The young are greyish brown with a row of dark spots on the back and a yellow area on either side of the head, giving them the appearance of small Grass Snakes (Natrix natrix), but unlike the latter, their scales are smooth rather than keeled.

E. longissima can be distinguished from Zamensis scalaris by its flatter snout, the rostral scale on the end of the snout which does not jut backwards between the internasals, and its rather calmer behaviour. The number of ventral and subcaudal scales on the Aesculapian Snake is also on average higher than on the Ladder Snake. The young of the two species are very easy to tell apart given the Ladder Snake’s juvenile patterning.

The rostral does not project between the internasals. There is one preocular (sometimes divided) and 2-3 postoculars and 8-9 supralabials, of which the 4th and 5th touch the eye. The temporals are arranged in a 2 x 3 or pattern. The dorsal scales are smooth and arranged in 23 (occasionally 21) rows at midbody. The ventral scales number 211-250 and there are 60-91 pairs of subcaudal scales.

The range of this species is very large compared with many other European snakes, being found from Spain to the Caucasus. In Spain it is found in Santander, the Basque Country, Navarre, Huesca, Lérida, Barcelona and Gerona. In the Basque Country it lives in deciduous woods and meadows between pine woods and oak groves, while in Catalonia it can be found in beech and oak areas. Generally it likes the sun (in the northernmost parts of its range it is normally found on southerly-facing, exposed slopes) but avoids excessive heat, and in the south may be found in more humid places than elsewhere. Most of its habitats are dry and in addition to the usual places (dry stone walls, sunny woods, ruins, etc) may include paths and tracks (when sunning itself) and sometimes haystacks (perhaps due to the known propensity of haystacks to produce internal heat due to bacterial fermentation).

The prey of the Aesculapian Snake is typical of that of most rat snakes, consisting of small mammals from mice and voles up to the size of squirrels, birds and lizards. The young normally start off with small lizards. It seems to have an unusually high metabolism for a snake, since in summer it may eat as frequently as every 3 days.

The Aesculapian Snake is normally a diurnal (active by day) and crepuscular (active at dawn/dusk) creature. It is less aggressive and more calm than the Ladder Snake, Elaphe [Rhinechis] scalaris, but this is relative: the Aesculapian Snake will still hold its ground, making chewing movements with its jaws, and will bite and/or empty its foul-smelling cloacal glands if further harassed. Its movements have been described as “deliberate”. Although not an arboreal snake it is a good climber of trees.

courtship takes place in Iberia in May-June. In June-July a clutch of 5-15 (usually no more than 15) eggs is laid. These hatch in September. The young are about 23-25cm long on hatching. Unusually, the mother may remain with them for a few days. Males mature sexually at a length of about 50cm, females at a length of 65cm (the latter taking about five years). One authority quotes records of 25-30 years longevity.

In Spain the Aesculapian Snake takes its winter rest from October to March: elsewhere this period may last up to 6 months, depending on climate. The period of greatest activity is May to July.

The wide range of the Aesculapian Snake would appear to make it reasonably secure, and it is not listed in the IUCN “Red List” of Endangered Species. Threats to this snake would no doubt include those which apply generally to snakes, namely loss of habitat, pollution and natural predators such as birds of prey or mustelid mammals.

Thanks to wikipedia for the image at the top of this page…. (Above image by FelixReimann – Own work, CC BY-SA 3.0, )

If anyone has any images of this species and would like to publish them on this page I would be most grateful. 🙂