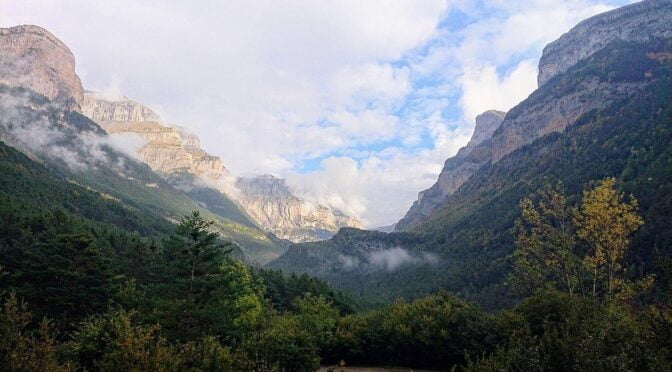 The park possesses a wide variety of ecosystems, as it receives both Atlantic and Mediterranean influences, the vegetation consisting of alpine, subalpine, montane, lowland-colline and submediterranean zones. The altitude within the park ranges from 600m to 3,355m above sea level. The massif is also called Las Tres Sorores in Spanish (The Three Sisters) as it includes the three peaks of Monte Perdido (3,355m), Cilindro de Marboré (3,335m) and Soum de Ramond (3,254m).

Find a Hotel in the area with Booking.com

Monte Perdido is the Spanish translation of the French “Mont Perdu” or in English “Lost Mountain“. Possibly, as it is less visible from the French side, being obscured by other peaks.

The river Arazas which tumbles along the Ordesa valley passes through the impressive glacial cirque “Circo de Soaso”. The valley curves around to the west creating a funnel for Atlantic weather which brings cool moist air, making the plant life lush and the climate moderate.

Massive vertical cliffs composed of horizontal layers, tower high above the pine forests and beyond these the peaks are snow capped for much of the year.

The environmental contrasts here are extreme with the karstic dryness at altitudes and the waterfalls with exuberant growth below. The valley floor is clothed with fir and beech trees together with oak, birch, ash and willow. Continuing above these are black pines, forming the upper edge of the tree line. From the height of 2,500 m are high meadows with their many species of flora which have adapted to this harsh environment.

Vehicle access to the canyon has been restricted and cars have to be left at the extensive car park at Torla. From here, a short bus ride takes you into the park and from this internal point there are a variety of walks.

The flora within the park is diverse due to altitudinal variations and climate influences. There are more than 1,500 species, of which 50 are Pyrenean endemics.

The submediterranean type is mostly found in valleys in the south and is dominated by Holm’s oak (Quercus ilex rotundifolia) in rocky sites, and Gall oak (Quercus faginea) in deep soils.

The lowland-colline vegetation is dominated by Sessile oak (Quercus sessiliflora).

The montane areas are characterised by Beech (Fagus sylvatica), European silver fir (Abies alba) and Scots pine (Pinus sylvestris). The Pyrenean-violet (Ramonda myconi) is found in this habitat along with others species such as the Pyrenean saxifrage (Saxifraga longifolia), Silver snapdragon (Antirrhinum sempervirens) and a carnivorous Butterwort (Pinguicula longifolia) each endemic to the Pyrenees.

The subalpine vegetation holds Mountain pine (Pinus uncinata) with Silvery vetch (Vicia argentea), the rare Pyrenean catchfly (Silene borderei) and the endemic Borderea pyrenaica of which there are only two varieties, both restricted to the Pyrenees. Petrocoptis crassifolia which has delicate pink flowers is a plant only known in two of the valleys within the park.

The alpine area carries a high proportion of endemic species to the Pyrenees, including a white flowered Saxifrage (Saxifraga pubescens subsp. iratiana) and two Rock-jasmines from the primrose family (Androsace pyrenaica, A. cylindrica) only found in the central Pyrenees and listed as endangered. The deep blue Dwarf bellflower (Campanula cochleariifolia) and Edelweiss (Leontopodium alpinum) grow here but also in other alpine regions.

The original park was set into motion with the plan to protect the Pyrenean Ibex, a type of wild mountain goat. The numbers of these dwindled in recent years with the death of the last of the species, a female, at the beginning of the year 2000. However there are other ungulates, the Pyrenean chamois (Rupicapra pyrenaica pyrenaica) whose numbers are growing after being threatened with extinction and European roe deer (Capreolus capreolus).

An unusual creature, the small Pyrenean desman (Galemys pyrenaicus) occurs in areas between 60-1,200 m at streams, rivers and lakes where it hunts by night for larval aquatic insects, crustaceans and terrestrial insects. Well adapted to semi aquatic life, they live in pairs with the male defending the territory, seeking shelter in rock crevices or burrows of water rats and not actually creating their own. Due to habitat loss and water pollution its numbers are decreasing and at present is noted as vulnerable on the red list of threatened species.

Reptiles include the Pyrenean rock lizard (Iberolacerta bonnali) which inhabits higher areas and the Asp viper (Vipera aspis) which although not really associated with high altitudes, in the Pyrenees it has been found at over 2,100 m above sea level.

Discovered in 1990, on the fringes of the Ordesa and Monte Perdido park, the Pyrenean frog (Rana pyrenaica) is endemic in the central and western Pyrenees and enjoys fast running, well oxygenated cold water.

The park is also the richest in Spain for butterflies, holding 139 species. The Apollo (Parnassius apollo) is one of the largest and most attractive with its pale colours and lazy flight, solely appearing above 1000m. There are 8 species that although present in other parts of Europe, are restricted almost exclusively to this park within Spain.