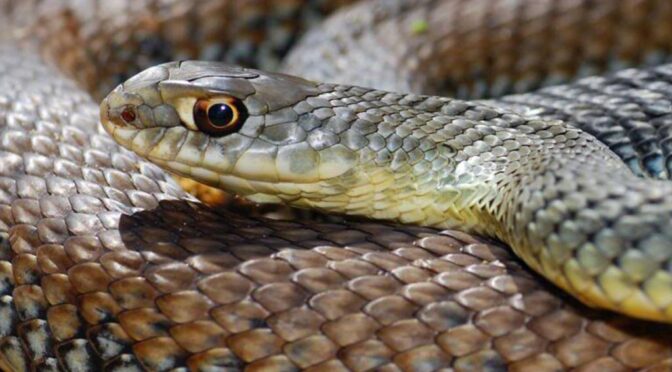 The Montpellier Snake can reach up to an overall length of 240cm although they average at less than 200cm and this species has the ability to emit a loud and persistent hiss if threatened.

One striking feature of its narrow head is its aggressive looking face. This is created by a very pronounced “eye-brow” over a large eye, sometimes further accentuated by a white mark. The eye can sometimes appear orange/red.

They are terrestrial, very agile and active during the day though they can also become crepuscular during the heat of summer.

The colouration of the adults is usually a uniform grey, olive, greenish, blackish or red / brown. There may also be dark or light spots. The belly is often a yellowish shade and blotched with dark markings. The juveniles may be the same as the adult in colour otherwise they have fine dark spots along their flanks and larger irregular marks along the back.

If disturbed or cornered they can raise their heads in a threatening manner as well as hissing, flattening out their neck, so appearing very aggressive. Receiving a venomous bite is very unlikely unless you are handling this snake as the fangs are at the very back of the top jaw whereby it has to have a very good grip of its prey for them to be effective The venom can create symptoms that pass after a few hours including numbness, stiffness, swelling and possibly fever.

They are incredibly adaptable in their habitat type from coastal sand dunes and salt-marshes to mountains of 2,150m altitude. Their preference is for sandy or rocky open terrain with adequate plant cover and rock or log piles for refuge. They may however be seen in agricultural areas, river banks and woodland perimeters.

Part of their ability to live in such a variation of eco-systems is their wide variety of prey items. They will eat mainly lizards (small and even Ocellated, which get quite large), geckos but also small birds, chicks of ground nesting birds, rats, mice, small rabbits and other snakes. Their prey is killed by venom from fangs situated at the back of the jaw, meaning that they need a good grip before this can be effective. The young eat invertebrates.

Breeding takes place between April and June after emerging from hibernation, with males often battling over a mate. Approximately one month later the females lays between 4 to 14 eggs (sometimes up to 20). These may be placed in split tree trunks, under rocks, under dead leaves or in unused burrows of rabbit or bee-eater. They also sometimes use communal areas to deposit their eggs. After about 2 months the hatchlings appear and are 20-36cm in length. They reach sexual maturity at between 3 to 5 years of age.

The males can live for 25 years in the wild whereas the female is shorter lived, perhaps to 15 years.

Similar species: The uniform colouring and size may be taken for a Grass Snake but the details of the face are very distinctive.