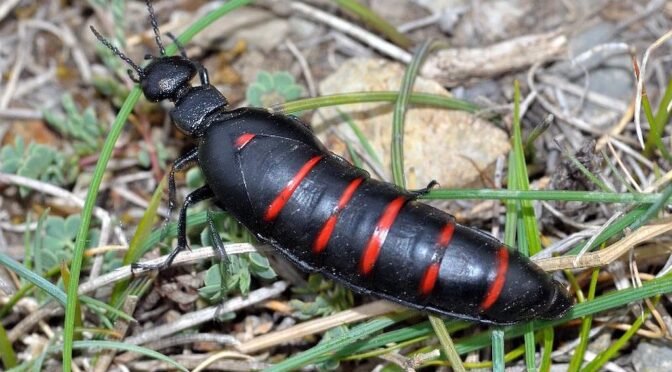 The Red-striped Oil Beetle – Berberomeloe majalis – Aceitera can reach a length of 6 cm. The basic colour is black with a red or orange stripe crossing each body segment. With the legs positioned towards the front of the body the cylindrical abdomen is dragged along the ground. There are tiny elytra on the thorax but this beetle is unable to fly.

The scientists that seemingly never sleep have now decided that there are many more species (sub species?) of blister beetle in Spain. they have been named in accordance to cultural and local customs so…

Why not join in and add your images to the topic over at the Iberia Nature Forum? New members are always welcome 🙂 https://iberianatureforum.com/forums/topic/6-new-species-of-oil-blister-beetle/

These large beetles tend to be localized and can often be seen in groups in the spring if the habitat is favourable. They live on sandy soils with mixed grasses and sparse scrub in woods and orchards or more open terrain. The female is much larger than the male with the shape and colouration being the same. A male will follow a female persistently until he is accepted as a mate.

After copulation the female will lay thousands of eggs in the ground in the vicinity of solitary bees. The elongated hatched larvae climb up to a flower. Here they await a bee. It must be a solitary bee and with their strong claws they hitch a ride back to the bee’s nest.

Once inside the nest a host egg is consumed and the beetle larva takes up residence in the cell. They continue to grow by feeding on the food mass stored for the bee pupa.

Many eggs are laid by the female but few will reach maturity due to the complex combination of events that will place it in a bee’s nest where it may grow and complete its transformation. If a larva accidentally selects a honey bee as host, it dies in the hive

When fully matured they leave the bees nest and as an adult are herbivores, feeding on different plant leaves and flowers.

If these adult beetles feel threatened a defense mechanism is to secrete an oily substance that is toxic, hence the common English name. This liquid can cause skin to blister and will be very painful if it makes contact with your eyes.

In the coastal areas of Murcia, Almeria and Granada there is another species which is endemic to this small part of Spain, Berberomeloe insignis. The shape and size are similar but this species is completely black over its body with two or three red patches on its head only.

At present, their survival is seriously threatened by housing developments, golf courses and greenhouses. The first two have drastically reduced the size of their habitat, while the heavy use of pesticides for intensive crops under plastic appears to have severely damaged the fauna of wild bees in the region, on whose nests the larvae of Berberomeloe depend.

The Spanish common names are many, the two most used are:

A few comments about this beetle

written by Stephen Daly, December 02, 2008
Hi All! One of the more curious rural stories about the use of this particular insect was told to me one day several years ago by an Andaluccian farmer, near where we live.
He had kept cattle all his life and said that in order to stop the calves taking it’s mothers milk, they would smear some oil beetles on the udder and teats of the cow. He told me that the calf would only try this once – never attempting this again so foul is the taste!
I did have some thoughts for the poor beetles as well!
…
written by Paulo, February 05, 2009
The portuguese name that is used in the Alentejo region is “vaca-loira”.
…
written by Admin, February 05, 2009
That’s a great story Stephen, thanks

And thank you to Paulo for the Alentejo name of this interesting little bug…. Do you know why it has this name? I get “Vaca” meaning “cow” but Loira I looked up in a dictionary and it said this meant “Blonde” or “pale”

Why would it be called a “blonde cow” ?
…
written by Paulo, February 06, 2009
Indeed, you got the meaning right: it does mean blonde cow in portuguese. I don’t know exactly where that name comes from, but I would guess the “yellow (loira)” part would either derive from the orange stripes or would be phonetically derived from “louca” (I have also seen this name being used: “vaca-louca”, mad cow), perhaps due to its extreme defense mechanism.
…
written by Louise , June 13, 2009
We live adjacent to a golf course in Alcaidesa, Southern Spain and we recently came across this unusual creature. We googled its description and found it in this chain discussion. Does anyone know whether this beetle originates from this area or did it migrate from elsewhere.

Given that we have only seen one does this mean that there will be larger numbers in the vicinity?

Louise
…
written by Anthea, June 20, 2009
Last year I found many of these wonderful, curious red-striped creatures, at the end of March, in the countryside near Asilah, south of Tangier in Morocco. Perhaps this accounts for the berber part of berbermeloe majalis. Do they turn into something else or is that it?

Anthea
…
written by Dean Adams, September 04, 2009
Hi
I visited Andulacia this year at the end of May and beginning of June and saw this beetle in several locations including the Wolf Park near Antequera, Laguna de Fuente de Piedra and at Saydo Park near Mollina. The beetles seem fearless, bold as brass, no doubt because of their noxious chemical protection. Thank you for providing a positive id of what type of oil beetle it is. I took photos, let me know if they are of any use.
Dean
…
written by Sally, May 04, 2010
These are common between Novo Sancti Petri and Roche (on the coast south of Cadiz in Andalucia) – they’re certainly completely unconcerned about their safety, now I know why! I’m guessing any cow that had these things smeared on her udders probably would be pretty mad – and who could blame her!! And I’m very grateful to Scott Fessey at Bristol Zoo in the UK who kindly guided me to this website when I sent him a photo and asked him to identify the beetle. Thanks Scott 😀
…
written by Richard Thomas, February 03, 2011
I have seen B. insignis almost literally on the border of Granada and Malaga provinces (about 10km from the sea and at c. 1000m altitude in the Sierra de Almijarra), so it’s a fair bet that they are found in MA as well as MU, AL & GR. And it was this website that enabled me to identify it: thank you.
…
written by Kjellin, March 25, 2011
We have also the Aceitera in Murcia, but not with the red stripes.
…
written by Kris Fosdike, April 19, 2011
Saw the female Aceitera hotly persued ( seemed liked stuck)by a male in the mountain above Montecorto, in the Serrania de Ronda on this Palm Sunday, 17th April 2011. Both had 6 bright red/orange stripes. They were walking across the camino. Both were about 60mm, so fully grown I’d guess. Wonderful sight, but had to indentify them. Glad I found this site.
…
written by Andrew jones, May 13, 2011
I have just returned from a holiday in Portugal and we saw many of these creatures in exactly the terrain described near a fabulous group of standing stones just outside Evora in the Alentejo. It was correctly identified by my friend Desmond from a photo I took with one in my hand – had I known the possible consequences of physical contact with this extraordinary beast I might have been less bold, but then I wouldn’t have got the picture nor known what it was! No harmful effects to date! If anyone would like to see my photo I’d be happy to send it.
…
written by Karen Henderson, May 17, 2011
I live in inland Alicante in the mountain region of Pinoso. My son and I saw one of these red-striped beetles for the first time in four years of living in this area. It was crossing a tarmac road surrounded by scrub land. It was large enough for us to notice it from the car so we stopped to have a closer look. It was at least 6cm long, if not a little more. Luckily we weren’t tempted to touch it as we weren’t sure what it was!