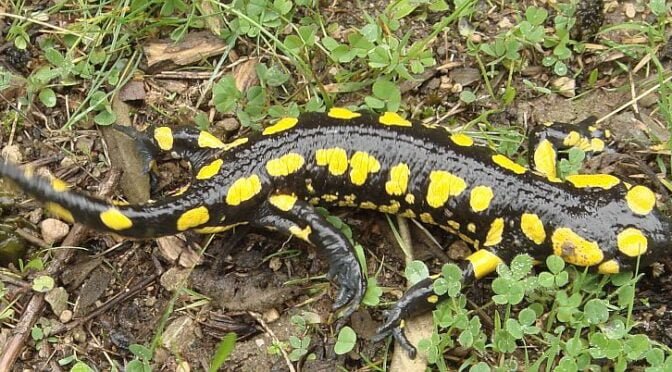 The fire salamander is so striking in appearance that in Iberia it cannot be mistaken for anything else, at least in its usual glossy coloration of yellow on an overall black background. There are many variations on this colour scheme (see the subspecies accounts below).

The head is wide and somewhat flattened, the snout short and either rounded or tapering to a point. Gland openings (the so-called parotids) are present behind each eye in a kidney-shaped arrangement, and along each side of the vertebral column is a further row of pores, with another row of glandular protuberances running along each side of the body. The throat has a sort of pleat (the gular fold).

The species is found in northern areas of Spain and Portugal including Catalonia, Basque Country, Cantabria, Asturias, Castilla y León, Galicia and the Pyrenees, where they are present up to 2,400m.

Although widespread across Europe, the fire salamander does have certain habitat preferences. High temperatures and dryness are both avoided, so that the central Iberian populations are found in the cooler mountain areas rather than at sea level. In fact temperatures of over 70 deg F (20 deg Celsius) can be fatal to fire salamanders, which although they cannot swim very well, will take to a comfortable level of water in order to stay cool enough for survival.

In the north of Spain they commonly found in moist deciduous forests, and in some areas may live underground. Some Catalonian populations were reported in caves systems at about 100m depth so it is not unknown for salamanders generally to live in caves or similar subterranean locations such as cellars or old mines. Other than this, Spanish fire salamanders may be found in Mediterranean woodland, scrub or among rocks around lakes.

The key factor is that they are never far from water as their lifecycle is dependant on it.

Patterns of activity vary with location and altitude. In lowland Galicia the fire salamander is active most of the year except for coldest winter, whereas in the Pyrenees it is limited to the months of February or March until October or November. Fire salamanders are largely nocturnal, leaving their hiding places when darkness falls and only returning at daybreak. However they can also be found occasionally in the daytime after and during rainfall. Although they prefer coolness, if the temperature drops below 5 deg C they tend to remain in their refuges.

Their diet is not particularly remarkable, consisting mainly of insects, gastropods (snails and slugs), aquatic worms, centipedes and spiders. Their sedentary lifestyle does not require a great deal of food, and the salamanders tend to remain within a fairly modest sized territory for all of their adult life, the main exception being when females travel to water sources to give birth, after which they return.

For the winter S. salamandra either buries itself under soil and leaves or takes refuge in underground locations.

Courtship takes place in April to May during the night. The male carries the female around on his back for a while and then deposits a spermatophore, essentially a packet of sperm, which the female then lowers herself onto. This can be retained for a long time, being effective up to 18 months after being received.

Usually the birth of the larvae takes place 6-9 months later into water, but there are variations on this theme. Whereas most subspecies usually produce anything from 8-70 small greyish larvae (2½-3½cm long), in a few cases eggs are laid, while S. s. bernadezi and S. s. fastuosa may bring much fewer (2-8) but fully-developed and metamorphosed individuals into the world. Metamorphosis of larvae not born in this manner is also very variable, from 2 weeks to 2 years, depending on subspecies, location, temperatures and food availability.

Sexual maturity is reached in 2-4 years.

Despite their fragility to heat, Fire Salamanders can be long-lived. A 1969 paper recorded a northern individual that had been kept in captivity for 43 years in Germany. Another source suggests that in the wild upward of 20 years may be normal.

Although abundant in much of Europe, the fire salamander faces the same conservation challenges as many other amphibians, namely the pollution or disappearance of water sources and degradation of its habitat in lowland areas, eg the replacement of natural woodland by spruce monoculture in some countries.

Climate change and an increase in average temperatures will also adversely affect this species, which is quite sensitive to heat.

Because of their defensive behaviour they are less subject to predation than many other amphibians, but even so are preyed upon by some birds, mammals and snakes, including the hedgehog (Erinaceus europaeus), the Grass Snake (Natrix natrix) and Seoane’s Viper (Vipera seoanei).