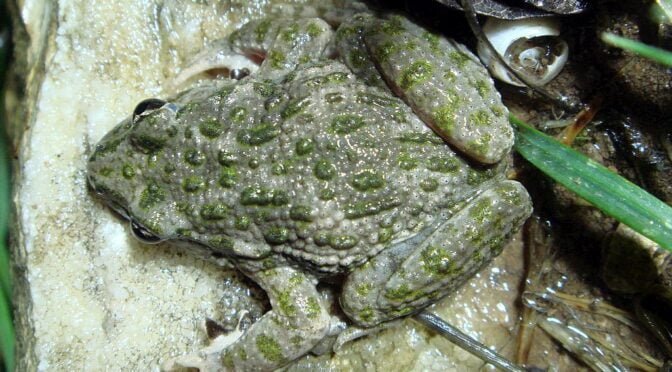 The Iberian Parsley Frog – Pelodytes ibericus -Sapillo moteado iberico is a small, slender frog, ranging between 32-36 mm in length (1¼ – 1½ inches). The head is flat and the snout short and rounded.

Eyes prominent and pupil vertical, the iris is golden with little black dots.

The back has a background colour which can vary, featuring shades of grey or olive-brown with small yellowish green warts arranged irregularly.

The glandular fold, which is not obvious, extends from the eye to the lumbar region. The eardrum is large but, barely visible being the same colour as the body. Their limbs are delicate and the hind legs adapted to jumping. It is also an excellent climber.

The Iberian parsley frog is endemic to the Iberian Peninsula and seems to be more common in the south of Spain but seems to be rarer in Portugal. It occurs in open areas, under bushes, among scattered trees, in salt marshes, fields and gardens and also seems to survive well in intensively farmed areas such as the rice fields in the Huelva province of Andalucia.

They spend the day hidden under rocks and gaps in the ground etc. In general they prefer open spaces in oak, pine forests and agricultural areas always near to their spawning sites.

Feeding on small invertebrates, orthoptera, beetles, earthworms, isopods and spiders these frogs are most active at nighttime

For breeding they prefer still areas in streams, pools or temporary puddles. The breeding season starts from October and lasts until May, the majority taking place between January and March. The eggs are laid in several groups of 100 to 300 eggs, deposited in a cord of gelatin adhered to aquatic plants. In total, she can lay about 900 eggs. Hatching occurs between 6-9 days later and in 58 -98 days, they can complete their larval development, or less in temporary puddles.

Read about more reptiles and amphibians in Spain here.