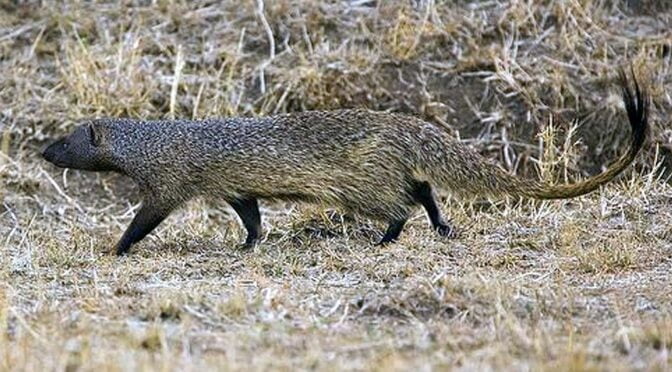 The Egyptian mongoose – Herpestes ichneumon – Meloncillo is also known as the ichneumon and although it is thought to be introduced to the Iberian Peninsula its been here long enough, I think, to be called a native.

Found along the coastal regions of the Mediterranean between North Africa and Turkey and Africa, there are several hypotheses to explain the occurrence of the Egyptian mongoose in Iberia.

With the last point in mind many authors consider the entire Iberian peninsular to be populated by the subspecies Herpestes ichneumon widdringtonii. It is distinguished from the populations in North Africa due to its somewhat larger size, darker color and much larger teeth

The legend of the giant hairy serpent

For many years legends and rumors floated around in many areas of Spain about a “hairy snake like monster” (el serpiente peluda). Stories to frighten children before bedtime, I would think, but actually based on real sightings of real animals?

In the summer of 2021 I was lucky enough to be in the right place at the right time (without a camera sadly he sighs!) to witness a family of Egyptian mongooses crossing a road. Head to tail they went in size order with the male presumably first, then the female and 5 youngsters following. I could easily understand that in bad light and weather this blur of low moving fur, teeth and tail could produce such legends of marshland monsters!

The following video (in Spanish) is well worth watching to see the Egyptian mongoose – Herpestes ichneumon – Meloncillo in action. (The footage of the scared hunter is really funny when he thinks he has seen the serpiente peluda!)

Egyptian mongoose are opportunistic predators, feeding on small vertebrates including rodents, birds, reptiles, frogs and various invertebrates such as insects, snails, crabs, and worms. They also eat plant matter such as fruits and tubers.

In many areas the easy meal of a chicken or domestic rabbit is also on the menu and I feel that the Iberian fox very often gets the blame for the work of a hungry mongoose.

Have a look at the cultural references on the wikipedia entry for the Egyptian mongoose – Herpestes ichneumon – Meloncillo…. it is quite interesting…. A Mongoose on a lead? 🙂
https://en.wikipedia.org/wiki/Egyptian_mongoose