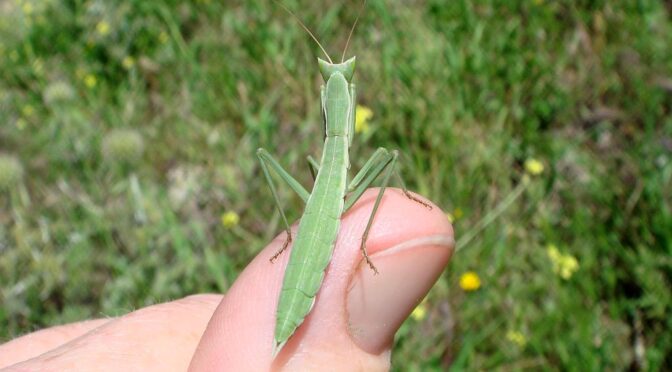 This a species of praying mantis which is endemic to the Iberian peninsular first described by José María Hugo de la Fuente Morales in 1894.

In the past, there were few areas known where it existed in Spain so it was considered rare and previously catalogued on the red list of the IUCN endangered species as “vulnerable”.

This species may be brown, grey or green in colour. They can be easily distinguished from other mantids by the very angular eyes that taper to (upward and outwards facing) points. The nymphs hide low down in grasses and jump with agility, making them difficult to tell apart from small grasshoppers.

Previously, the areas where it is known to live were Pozuelo de Calatrava (Ciudad Real), Madrid, Cuenca, Extremadura, Jaén and Granada. They were also discovered in 2001 at Jerez de la Frontera (Cádiz).

It may well have been that rather than being rare it was simply over looked as it has an uncanny ability to blend into the surroundings.

We at Wildside Holidays noted this species at a site to the western edge of the province of Malaga near to the border with Cadiz, an adult was seen in April 2007 and two nymphs photographed at the same location in October with many egg cases discovered in the locality. Since learning to recognise their characteristics we have found this species in 12 other locations around the Cadiz / Malaga border.

They appear to live in areas little disturbed by vehicles or people within open areas of grassland or areas of sparse scrub and grasses. The egg cases, oothecas, are fixed onto the under sides of rocks.

More general information and images on Mantises and a list of the species within Iberia can be found here.

One thought on “Apteromantis aptera”