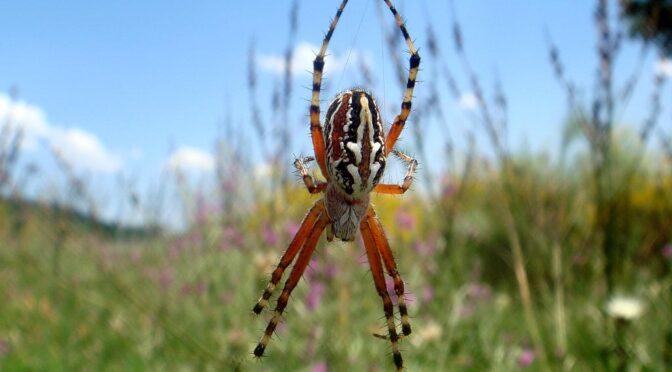 The females of Oak spider – Aculepeira ceropegia- Araña hoja de roble are large and conspicuous with an unmistakable design on the abdomen in the form of an oak leaf, from which comes the common name of the species. The basic colour is usually yellow to orange, patterned with highly contrasting black and white. The abdomen is pointed at both ends. The legs are darkly banded and the head covered by greyish-brown hairs.

Located mainly in open areas of scrub, in meadows and woodland clearings, they build a web among small shrubs or grasses and stay motionless in the centre facing downwards, waiting for prey to get caught up.

The webs are more dense in the centre.

This species can be seen more often in spring and early summer though adults are visible from May to September. During the summer they mature and mating takes place. The eggs are produced in early autumn and wrapped in a silk ball for protection.

This photo below shows the size difference between the male and female but note that both have the oak leaf pattern on the abdomen.

The Oak spider – Aculepeira ceropegia – Araña hoja de roble is an orb weaving spider and so at a distance may be confused with some other orb weavers. On closer inspection, though, the oak leaf pattern on the abdomen is an unmistakeable guide to identification.