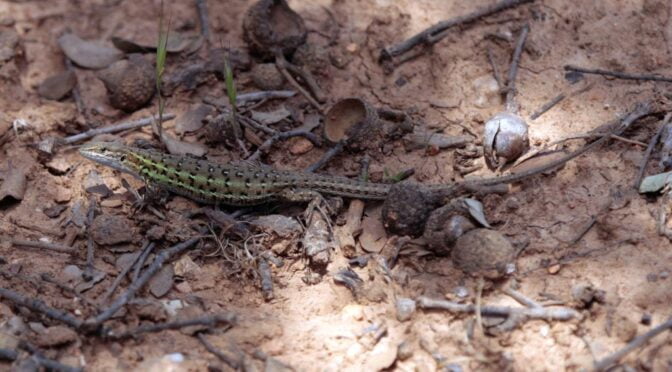 Spanish Psammodromus (Psammodromus hispanicus) Lagartija cenicienta is a small lizard with a total length of about 15cm of which one third is the head and body. It can be distinguished from similar-sized small lacertids by its rather large keeled scales which overlap in a shingle-like manner and its weak collar, which is only visible on the sides. By contrast other small lacertids usually have non-overlapping, non-keeled dorsal scales and/or a definitive collar. The ground colour tends to be brown or ash grey but may also be olive or ochre, with a dorsal pattern of 4-6 longitudinal white or yellowish stripes overlaying transverse black bars, giving it a characteristically “segmented or “humbug”” appearance. However in some populations, notably those of the western subspecies, this pattern may be reduced or absent, and some are simply a complete grey, brown or olive.

The species is found throughout much of Iberia and the southern coastal areas of France. Its absence from the Pyrenees may be due to its preference for lowland habitat: in the south it is found at up to 1,700m (Sierra de Guadarrama and Sierra de Nevada), but normally lives at much lower altitudes. Dry open spaces with firm or sandy soil, often with a covering of low bushes are the preferred habitat. In places without much vegetative covering such as gravel plains or sand flats the lizards will often move at great speed from one place to another and covering some distance, hence the common name of “Sandrunner”. Like many small lizards the Spanish Psammodromus will take cover within the twiggy base of a plant or burrow beneath its roots. Territories are small, about 25m2.

Identification will normally boil down to where the animal is spotted. Populations in Andalucía, Castilla la Mancha, Extremadura and Portugal appear to belong to the western (Spanish) subspecies, those of Murcia, Valencia, Cataluña, Aragón and France to the Eastern subspecies.

(All of the images in this article were taken in Andalucia.)

Like most small lacertids, P. hispanicus will eat small invertebrates and a study of Alicante populations showed that about a quarter of its prey was spiders, the rest being made up of varied insects.

In the mating season Psammodromus make squeaking calls, and on male lizards the flanks turn green. The mating process itself is fairly short, often a minute. Gravid females are seen from April through July. A clutch of 2-6 eggs is laid, usually twice per year. Incubation takes 48 days and the young appear at the beginning of June or the end of July or beginning of August, measuring about 5½ cm in total length. Sexual maturity is reached rapidly, in 8-9 months, as in common with many small lacertid species, Psammodromus hispanicus is not long-lived, 2-3 years being the norm although a few may exceed this.

A study of French (Eastern) populations showed that yearly activity ran between February and September-October. This may well apply to many of the Iberian populations, although it is reasonable to suppose that those in the south may be active most if not all of the year.

Owing to its small size this lizard has escaped direct predation by man, although obviously habitat loss will have had an indirect impact. Notes on the similar-sized Psammodromus blanci from North Africa indicated that it was preyed on by the snakes Malpolon monspessulanus and Macroprotodon cucullatus (both also found in Spain) and the lizard Lacerta [Timon] pater (a close relative of Timon lepidus which is found in Spain), so it would seem at least plausible that these snakes and Timon lepidus would be possible predators of Psammodromus hispanicus.