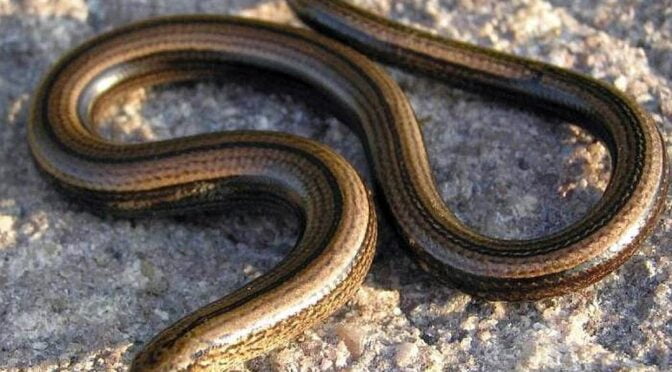 The Slow Worm (Anguis fragilis) Lución is the only truly legless lizard in Spain and Portugal. It can be distinguished from snakes by its eyelids and visible ear openings (features that all snakes lack) and from the Southwest Iberian Worm Lizard (Blanus mariae) by its eyes, these being vestigial and almost invisible in the worm lizard. The Western Three-Toed Skink (Chalcides striatus) is also somewhat similar but on closer inspection will show its small limbs with three toes.

In coloration Anguis fragilis has an overall uniform colour, usually brown, grey or bronze but sometimes red or copper, with the underneath a shade of grey. Males are fairly plain but females often have a vertebral stripe, dark sides and belly. The young are a striking gold or silver with a similar stripe and dark patterning to the female. In addition to normal coloration, both albino and melanistic (very dark or all black) individuals have been found. The scales are smooth. Apart from the variation in coloration there are no known differences among the Iberian populations.

Adult Slow Worms reach about 50 cm, of which more than half may be the tail if unregenerated (i.e. not broken off). However, regenerated tails are quite common in this species, as they frequently “break” and the regenerative process is very slow.

Another easy way to distinguish the Slow Worm from a snake is its rather awkward wriggling way of movement as opposed to the smooth, apparently effortless gliding of a snake.

Habitat and distribution on the Iberian Peninsular

The species is found in northern areas of Spain and Portugal including Catalonia, the Basque Country, Cantabria, Asturias, Castilla y Leon, Galicia and the Pyrenees up to around 2,400 metres. In fact, in terms of habitat, it is very adaptable being found from sea level to high mountain altitudes generally and also in a variety of environments including meadows, areas of undergrowth, railway and even motorway embankments.

The above map comes from the excellent website Aves de Extremadura: http://aves-extremadura.blogspot.com/2017/05/el-lucion-anguis-fragilis-en-extremadura.html (In Spanish) The yellow arrows shows the furthest South that a Slow Worm (Anguis fragilis) Lución has been recorded.

The common factor seems to be that the ideal environment is damp but not wet and not too sunny, possibly why this species is not found in the south of the Iberian Peninsula.

Slow Worms are reclusive animals, so their habitat is often characterised by plentiful cover in the form of undergrowth, fallen leaves, stones, etc. They often hide beneath rocks or fallen wood, manmade items such as sheet iron or rubber mats also being utilised.The species is diurnal (daytime active), its maximum activity normally taking place 5-10am and 6-9pm in Spain and Portugal. It may also be encountered after a shower of rain, possibly because of the greater possibility of finding gastropod prey.

What does a slow worm eat?

The Slow Worm preys mainly on gastropods (small slugs and snails) a great reason the species should be a welcome visitor to any garden. 🙂 It will also take arthropods and sometimes small reptiles, basically anything that will fit in its mouth.

In Iberia the Slow Worm emerges from hibernation in March. Courtship and mating take place in April to May, males fighting and wrestling each other. The mating ritual itself may last up to 10 hours. The females give birth to live young (ovoviviparous birth) after 11-13 weeks and in the days leading up to birth, the female can often be seen basking in the sun on a warm road. 5-26 young are born but on average 6-12 is more normal.

In western Europe males breed at the age of 3-4 years, females at 4-5 years. Slow Worms enter hibernation in autumn, often forming communal dens of up to 100 individuals together with salamanders and (in a hibernation truce!) vipers in suitable frost-free places such as holes in the ground or among roots.

These slow and inoffensive reptiles are known for their incredible longevity – 10-15 years in the wild is cited by one authority, another suggests 30 years, and there is a captive record for no less than 54 years.

The Slow Worm appears to be fairly abundant in its range and therefore less endangered by human activity than some other creatures. Unfortunately it is sometimes still mistaken for a snake and may be persecuted as a result. Across its range it has various predators including small carnivores, several birds of prey and snakes, including the Smooth Snake (Coronella austriaca) but probably the most damaging to populations is the domestic cat.