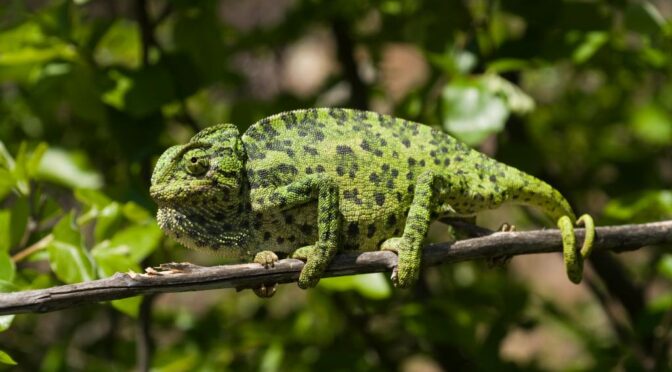 Above image is by Benny Trap who has a fantastic collection of reptile and amphibian images over at wikipedia. https://commons.wikimedia.org/wiki/User:Benny_Trapp

The southern coastal areas of Spain and Portugal. Elsewhere it is found on Malta, Sicily, Crete and the Greek islands of Chios and Samos as well as North Africa and south west Asia. some of these populations were possibly deliberate introductions or accidental transportation in the past. The same may have occured with this species on the Canary islands. (A similar species (Chameleo africanus) exists in the extreme south of Greece).

Chameleons probably need little introduction and are instantly recognisable by both their appearance and their behaviour. All are members of the genus Chamaeleo and the only one which occurs in Europe they have laterally compressed bodies, a coiled, prehensile tail (like that of a monkey, allowing them to use it as a fifth limb to grasp branches) a very prominent head with usually some sort of adornment in the form of a casque or horns, fused eyelids that cover eyes which can move independently of each other, and feet with fused fingers and toes, essentially making the normally five digits of most lizards into two rather thick ones that form a pincer shape ideal for grasping and walking along branches.

The tongue is specially adapted for catching insect prey at long range, being coiled up inside the mouth like a huge spring with an enlarged sticky end. Chameleons invariably stalk very slowly through vegetation (usually in the trees, although they do descend to the ground), focus on the target prey and shoot the tongue out at it and equally quickly withdraw it back with the prey stuck on the end.

Although chameleons are renowned for changing colour, this is in fact more a reflection of their mood, communication to other chameleons or body temperature than any conscious attempt at camouflage.
As a rule these are not social animals even by the standards of reptiles, adults tending to avoid one another. Males have their own territories that often include females and defend these spaces fairly vigorously.

Chamaelo chamaeleon is a medium-sized chameleon with a total length of about 30cm/12”, of which somewhat less than half of this is the tail. The head is distinguished by a crest or casque on the top that curves backwards and a flap-like lobe on either side of the head. The normal ground colour is a grass green, but this can change to blackish, brown, grey or white, sometimes with orange spots or a broken white line along the side. Individuals spotted at night are often very pale. They are daytime animals, being most active in the morning and afternoon.

The species is found in the southern coastal areas of Spain and Portugal, including the Algarve, Málaga, Cadiz, Huelva and Almería. Oddly enough for a normally arboreal lizard it can be found on coastal dunes as well as bushes and in pine and eucalyptus woods. In Iberia it prefers low altitudes, up to 800m, but in North Africa can be found in the Atlas mountains almost twice as high.

Although there are no scientifically recognised variations in the Iberian populations at any rate, one authority noted that Iberian and North African populations tend to have a shorter tail and a lower casque on the head of the male.

The Mediterranean or “Common” Chameleon’s diet consists of various insects such as grasshoppers and crickets, flies, butterflies and moths, but they sometimes take small lizards or nestling birds.

The breeding season is later in the year than for most reptiles, during August and September males become notably aggressive towards one another, displaying their colours (often a deep green with black spots), puffing out their throats and gaping. Females are also displayed to. Mating lasts about 15 minutes and normally takes place twice daily over a two week period. After 50-60 days the female digs a hole 15-20cm deep and lays about 30 eggs. Incubation lasts no less than 8-9 months, so that eggs laid in one year do not hatch until July or August of the next. Reproduction is a strain on the female, nearly half dying after their first clutch, but chameleons in general are considered short-lived creatures with lives of just a few years.

While some lizard species are active all year round in the chameleon’s range, the chameleon itself has a period of winter inactivity from December to March, during which it normally buries itself or hides beneath rocks.

The Chameleon in Iberia has, unfortunately, many factors conspiring against its future survival. Partly, the very slow gait of this lizard makes it easy prey for domestic cats, road traffic and bush fires.

Habitat loss due to housing projects, golf courses and road building has fragmented populations especially along the coastal areas of the south. There are also natural predators such as the Montpellier snake (Malpolon monspessulanus) and the Montagu’s harrier (Circus pygarus)