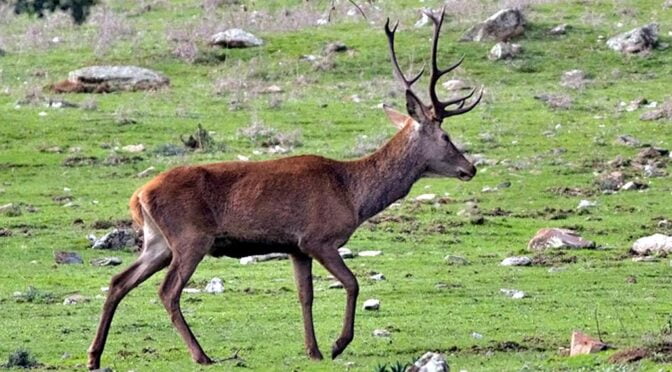 The size of the red deer varies within Spain depending on genetics and food availability. The males can be 90 y 120 cm at the shoulder with an overall length of 160 y 220 cm, the females are smaller.

They prefer to live where woodlands connect to open areas or scrubland, combining good grazing with a safe retreat. They are very shy and timid animals who roam freely and are most active during dawn and dusk when they eat grasses, leaves and shoots. Males are usually alone, whereas females, along with the youngest, live in herds of 3 or more, led by an experienced female.

Hotels in the Monfrague Natural Park

Many red deer in the Doñana National Park are a pure strain of the subspecies whereas many landowners on hunting reserves else where in Spain have introduced outside stock to improve the antler size as this is a lucrative trophy. Their populations are scattered throughout Spain, mainly in game reserves and natural or national parks. (Those in Portugal are from reintroduction and also through natural expansion, crossing the border from Spain.)

Only the stags have antlers and these are related to the animals testosterone levels and grow annually. The antlers, which are bone, grow quickly in the spring and initially they are protected by velvet. As the testosterone levels drop towards the end of the year the antlers are shed. It is believed that more robust and complex antlers signify higher fertility assisting the hinds to choose the best mate from the stags.

Adult males will normally stay in bachelor groups for most of the year. At the same time the females or “hinds” will have their own groups with only the youngest males. At the end of summer and beginning of winter is a mating ritual or Rut. At this point the males compete with each other to attract groups of females.

The peak breeding age for the males is 8 up to 11 years old. Deer are generally active day and night, but signs of the rut are at dusk and dawn. The stags bellow repeatedly, this sound travels well and attracts both females and competitive males. The males will assess each other while walking in parallel. One may back down at this point or if they are equally matched they enter into combat by clashing antlers and twisting to off balance the opponent. This battle can lead to injury and even death. (Remains of stags have been discovered where the locked antlers of a fighting pair have led to both dying from dehydration.) Once dominancy has been determined the Alpha stag will continue to bellow thus keeping to the periphery lesser stags and holding his harem of up to 20 hinds together. On continual watch during this time the breeding stag can lose around a fifth of their body weight as they rarely feed.

After the breeding period the males and females separate. The birth of one or sometimes two fawns takes place the following spring from May to July after 8 months of gestation. The young begin to graze after 3 months of being solely on milk. The female with young will not join in the next rut. The male calves will disperse from the female groups when they are one or two years old. Deer may live for 20 years with the females becoming sexually mature at 2 to 3 years and the males at 3 years but with little chance of collecting a harem for a further 5 years.

Threats to the red deer

Agricultural intensification and urban growth are putting pressure on their habitat. Other dangers to Red Deer are over hunting and predation from feral dogs. The greatest natural predators are Wolves but these are restricted to confined habitats themselves due to persecution. Reduction in numbers can also be attributed to Wild Boar and Lynx with the latter only existing in pockets of small numbers as it is a mammal under severe threat of extinction.

6 thoughts on “The Red Deer”